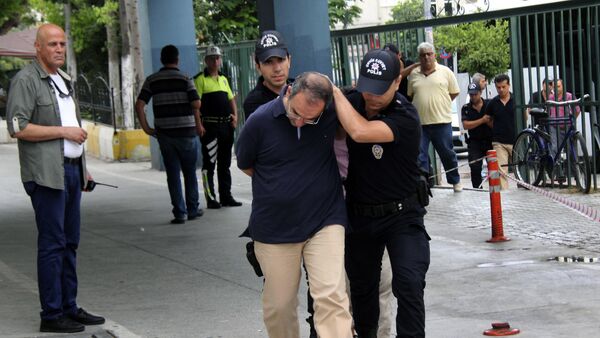 © AP Photo / Depo Photos via AP
Subscribe
The people involved in the recent coup attempt in Turkey were kept under surveillance by the country's intelligence service, according to a high-ranking member of the Turkish ruling party.

Assad Believes Erdogan Used Coup as Pretext to Carry Out Purge in Turkey
ANKARA (Sputnik) – Turkish intelligence service had spied on those arrested and dismissed after the failed coup attempt before it happened, Yasin Aktay, deputy chair of Turkey’s ruling Justice and Development Party (AKP), told Sputnik on Thursday.

"There were lists [of participants before the coup]. The country’s intelligence spied on all of them… Of course it knows who is who but everything is in line with the law. We never struggle with people only because they are adherents of a certain organization or have certain political views," Aktay said.

He also called participants of the coup attempt members of a terrorist organization.

"This structure is not simple, ordinary; they are a terrorist organization and that is clear. So that our friends could better understand the situation, imagine that members of al-Qaeda or Islamic State [both outlawed in Russia] are holding offices at schools, security bodies or armed forces of the United States. Imagine that intelligence services obtained their names. Imagine what they would do. We are not doing even half of what they would do… Turkey has no options but to remove the threat," Aktay added.

On July 15, the Turkish authorities said that a coup attempt was taking place in the country. The coup was suppressed the following day. Some 290 people were killed and around 1,500 injured during the failed coup, according to the country's authorities.

Thousands of military officers, high-ranking civil servants, judges and teachers suspected of being disloyal to President Recep Tayyip Erdogan have been detained or sacked in Turkey after the failed attempt to overthrow him.