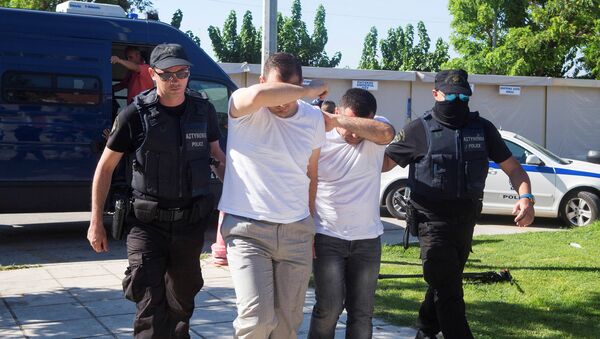 © REUTERS / Vasilis Ververidis/Eurokinissi
Subscribe
In his analysis of the after-coup developments in Turkey, a Turkish-American political analyst suggests that President Erdogan now “has a carte blanche to go as far as he wants" while the country’s military, which used to be “the most respected and trusted public institution of the country,” is going to “witness a free fall of its respectability.”

Geopolitical Consequences of the Coup – Turkey's 'U-Turn Towards Russia'
Soner Çagaptay, a US-based Turkish-American political scientist and the director of the Turkish Research Program at the Washington Institute for Near East Policy, has made an analysis of further political developments in post-coup Turkey.

There are two scenarios, Uri Friedman, the reporter on global affairs for The Atlantic, quotes Çagaptay as saying in his article for the magazine.

“One is drastic and dramatic,” the political scientists suggests.

“The conservative, Islamist-allied Erdogan has already challenged Turkey’s tradition of secularism — a tradition the military has long sought to uphold — in realms such as public education. Now Erdogan could harness the religious zeal whipped up by the coup to disregard the Turkish constitution and usher in an Islamist revolution.”

What's more likely is that Erdogan “capitalizes on his post-coup support to push constitutional amendments through parliament that change Turkey from a parliamentary system to a presidential one, with Erdogan at the helm.”

Erdogan, Soner Çagaptay continued, “has a track record of persecuting and prosecuting his opponents, usually on the premise that there’s a conspiracy to undermine him.”

Turkish Authorities 'Using the Coup to Purge the Army, Build Up New Forces'
Now, the political scientist notes, “it’s clear that there actually was a conspiracy to undermine him.”

“So his crackdown on dissent is going to become more pervasive, the net is going to be cast more widely. As he marches toward an executive-style presidency, it will become even more difficult for people in the opposition to oppose him democratically, because every opposition movement can easily be labeled as supporting a coup, therefore being illegitimate, and therefore susceptible to being targeted by the government or by its supporters.”

The political analyst suggested yet another development:

“Until this coup, the military was the most respected and trusted public institution of the country,” he said. “Now it’s going to witness a free fall of its respectability.”

Like many other experts, Soner Çagaptay also suggested that Recep Tayyip Erdogan’s response will seriously damage the country’s relations with the EU and the US.

Turkish Coup – a Staged Event Aimed at Changing Constitution?
“Erdogan now has a carte blanche to go as far as he wants,” he said, adding that this man “has improved living standards in Turkey and fashioned Turkey into a middle-income country. But he never healed Turkish society’s most problematic schisms — between religious and secular Turks, and between the government and the Kurds. In fact, those schisms have only grown more pronounced.”

'The revolt failed in part because of basic math'

While commenting on the reasons for the failure of the coup, the political analyst said that “the revolt failed in part because of basic math” and “because Erdogan won the information battle on two fronts.”

Goal Reached? Military Coup Attempt Disempowers Turkish Armed Forces
Unlike past successful coups in the country, he explained, this one was not orchestrated by top military officials through the chain of command; instead, a faction of the security services, perhaps concentrated in branches like the Air Force and gendarmerie, appears to have been implicated.

With regards to the information failure, he said, “what proved pivotal was not just the medium, but the message.”

The political analyst explained that the Turkish president had successfully used the social media and the country’s imams to mobilize the people.

“It was the first time in Turkey’s history that its citizens rose up to prevent a military coup,” the magazine concludes.