Board of Governors of BRICS New Development Bank Meets in Shanghai 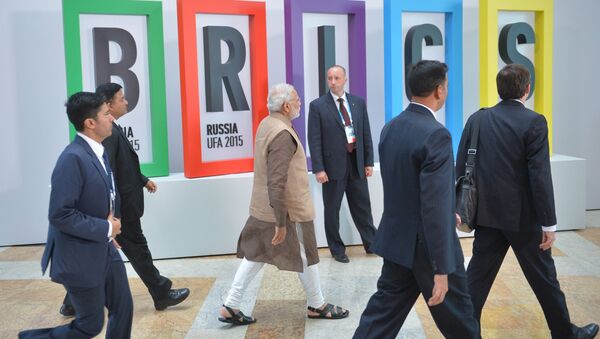 The first annual meeting of the Board of Governors of the BRICS New Development Bank was held in Shanghai, China.

India was represented by Raj Kumar, Joint Secretary in the Department of Economic Affairs.

"India is following the approach of Reform to Transform through far reaching Structural Reforms. We have taken several initiatives to boost the investment climate and improve the ease of doing business. The National Infrastructure Investment Fund has been set up to stimulate investment in infrastructure. Initiatives such as Make in India, Start-up India and Skill India are focused on encouraging innovations, entrepreneurship and job creation," Raj Kumar, Joint Secretary in the Department of Economic Affairs, said during the first meeting of the NDB.

India Considering Visa Waiver for BRICS Nationals
During India's chairmanship of the BRICS, the New Development Bank is likely to focus on

energy generation projects, both renewable and non-renewable, which utilize cost effective and clean technologies, as well as transport projects, which have a significant impact on the reduction of regional and spatial inequalities and promote inclusive growth, as well as Urban sector infrastructure projects, which are aimed at improving the quality of life of the people.