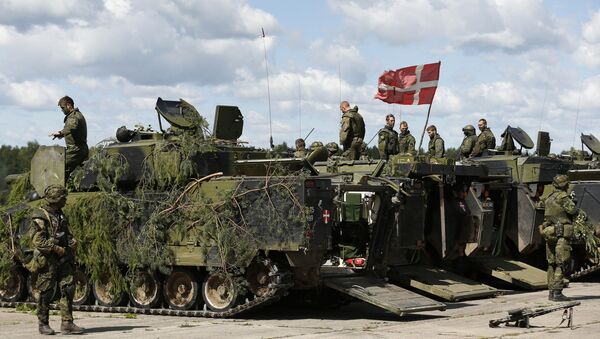 Discussing the growing danger of a new military conflict between the West and Russia over the crisis in Ukraine, veteran Danish journalist O.K. Jensen scolded EU officials and NATO generals for biting off more than they could chew and encroaching on Russia's sphere of influence.

"The responsibility for Kiev's loss of Crimea and parts of eastern Ukraine lies squarely on the EU and star generals of NATO," Jensen wrote, in a punchy op-ed for the Danish daily Jyllands-Posten.

Paranoid Critics of Russia Have Drawn Europe Into 'Political Quagmire'
"They should have stayed away from Ukraine, but greed got the best of them," he added.

Unfortunately, the journalist recalled, "there are few of us left who remember the roar of heavy bombers flying low over Copenhagen during the Second World War, and the bombings of the sugar factory, the Shell building the French school in Frederiksberg."

"The sound of heavy bombers returned again when the Soviets invaded Hungary [in 1956]," Jensen added, and in 1962, "when the Russians and the Americans danced their deadly dance over the blockade against Cuba."

"But now, the memory of war seems so distant that we happily send Danish soldiers to the east to challenge the Russians. And what did they do to us to prompt such a response?"

Polish FM Says Up to 10,000 NATO Soldiers to Be Deployed in Country
Looking back through recent European history, the commentator suggested that Napoleon, and Hitler, with his idea of a 'Neue Europa', both have something in common with the EU: the drive for power.

"All three of them were and continue to be obsessed with one idea: to subjugate as many countries as possible. And the Russians? They gave Ukraine its independence when the communist regime collapsed."

After the fall of the Berlin Wall, the journalist recalled, "an informal agreement was reached…between NATO and the Russians that the alliance would not move too close to the sphere of Russian interests. And what did they end up doing? Cheating the Russians. NATO marched into the Baltic states, Poland, and [the rest of] Eastern Europe. Both the EU and NATO then set their longing eyes on Ukraine, Russia's breadbasket."

"EU commissioners saw a new opportunity – a Ukraine under EU control," while "Crimea and the Black Sea were [imagined] as NATO waters" by the generals.

"Ukraine has been and will always be in Russia's sphere of interest," Jensen emphasized. Therefore, Moscow's moves in and around the country, amounted to nothing more than a "stop sign for the EU," he added.

Now, the journalist warned, "NATO generals and the EU are beginning a new war dance. Their battle cry is the Russian occupation of Crimea and eastern Ukraine. Beware brave Europeans! Fear the Russian Ivan, who thirsts for Poland and the Baltic states. Danish soldiers who survived Afghanistan will now be sent to the Baltic to stand by their musketeer oath."

New Cold War: ‘If NATO Encroaches on Nuclear Russia, It will be Punished’
At the same time, the bloc's leaders, unfortunately, "are too proud to admit guilt for their mistakes or respond to criticism…Brexit? – The numbskulled British are to blame. Migration crisis? Let others sort it out. Ukraine? It's all Russia's fault.'"

The same war drums now being pounded against Russia were pounded in the run-up to the Iraq War, where weapons of mass destruction were never found, the journalist added. "The dance of war began, the heads of the totem pole laughed, our boys went to die, and in the end it turned out to be one big political lie."

"Gaddafi had to hang too," Jensen noted, "and we, the missionaries of democracy, were at the front of the column with our prayer books and warplanes. Together with the Russians we agreed to a no-fly zone, saying that Libyan planes were not allowed to fly. And then NATO fooled the Russians again, continuing its bombings until nothing was left of Gaddafi's army. And what did we get out of this? The opening of Pandora's Box and the release of all its demons."

Essentially, the journalist noted, "just as the British prime ministers of yesterday once comforted Queen Victoria with the phrase 'Her Majesty's Government will send a gunboat', so too do we, in the name of democracy, bomb Syria, Libya, Afghanistan and Iraq, with the result that Europe is now buried in mass migration from Muslim countries. They are making European nations totter like the Eastern Roman Empire did before it was conquered by the Ottomans, with the city of Constantinople becoming the Turkish city of Istanbul."

Ultimately, Jensen asked: "Does Europe want to end up like Constantinople, with the Russians on one side and the Muslims at the door? Hardly; it's only necessary to look after ourselves and to stop the military buildup on the Russian border, and stop depending on the EU and the Americans. And then we will not be embroiled in any new contrived wars."