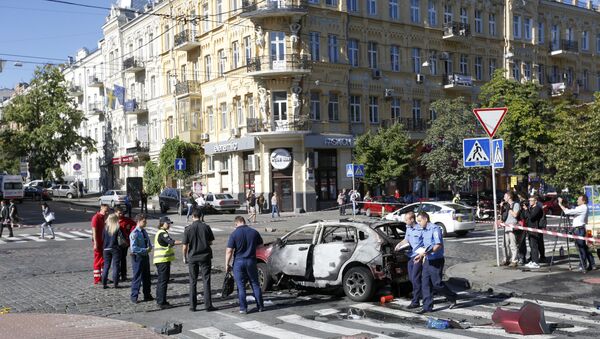 Sevgil Musayeva-Borovyk, the news outlet’s editor-in-chief said that the murder of well-known journalist Pavel Sheremet, who was working for investigative newspaper Ukrayinska Pravda, is connected to his work.

KIEV (Sputnik) – The death of well-known journalist Pavel Sheremet, who was working for investigative newspaper Ukrayinska Pravda, in a car explosion in Kiev was not an accident and is linked to his professional activity, the news outlet’s editor-in-chief said Wednesday.

Ukraine Pursues Professional Life, 'Russian Trace' in Journalist Death
Earlier in the day, Sheremet, who also worked for Radio Vesti broadcaster, died when a car he was inside blew up in the center of Kiev. According to the Ukrainian Interior Ministry, the explosion was probably caused by a remote-controlled explosive device.

"I think it’s true [that the murder is connected to his work] because Sheremet worked at Radio Vesti every day around this time. This morning he was also driving to work," Sevgil Musayeva-Borovyk said.

She added that Sheremet was involved in projects on developing journalism, for example, holding lectures and workshops for young journalists.

Pavel Sheremet was a prominent, Minsk-born journalist who worked in Russia, Belarus and Ukraine. Sheremet had worked in Kiev for the last five years.