Calls for Investigation After Alleged US Airstrike on Syrian Village 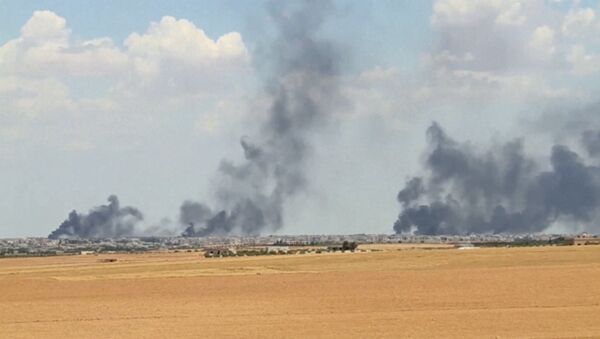 There are calls for an independent and transparent investigation to be established following reports that dozens of civilians, including many children were killed in a US-led coalition airstrike in Northern Syria.

Local media reports, along with first hand evidence and testimonies gathered by aid agencies, suggest that at least 60 civilians were killed in their own homes during strikes on the village of al-Tukhar, near Manbij in Syria's Aleppo Governorate on Monday, July 18.

​While it is still unknown exactly who carried out the attack, US Central Command (CENTCOM) statements said US-led forces carried out 11 airstrikes on July 17 and June 18 against what it said were Daesh tactical bases in the area near al-Tukhar village.

The international coalition has targeted the area in the past, amid reports Daesh and other jihadist forces control some parts of the region.

Territory ISIL holds continues to shrink as they're squeezed on multiple fronts by indigenous anti-ISIL forces and Coalition airpower.

The latest strikes in al-Tukhar has once again raised concerns about the civilian cost of the international campaign in Syria, with reports that more than 100 civilians have been killed near the city of Manbij since the beginning of June.

With much information about the number of civilian casualties still unknown, there have been calls for an independent investigation to be established.

​"The bombing of al-Tukhar may have resulted in the largest loss of civilian life by coalition operations in Syria," said Magdalena Mughrabi, Amnesty International's deputy director for the Middle East.

"There must be a prompt, independent and transparent investigation to determine what happened, who was responsible, and how to avoid further needless loss of civilian life."

The US has come under fire in the past after refusing to allow an independent investigation to be carried out in the wake of a 2015 US airstrike on a MSF medical facility in Kunduz, Afghanistan.

“The bombing of al-Tukhar may have resulted in the largest loss of civilian life by coalition operations in Syria." https://t.co/zG7YaaYIB1

​"International humanitarian law requires all parties to a conflict to prevent the needless loss of civilian life," Mughrabi said.

"Even if the coalition forces believed that fighters from the armed group calling itself Islamic State were present around al-Tukhar, they should have taken the necessary precaution to identify who else was present to avoid or at least minimize civilian casualties."