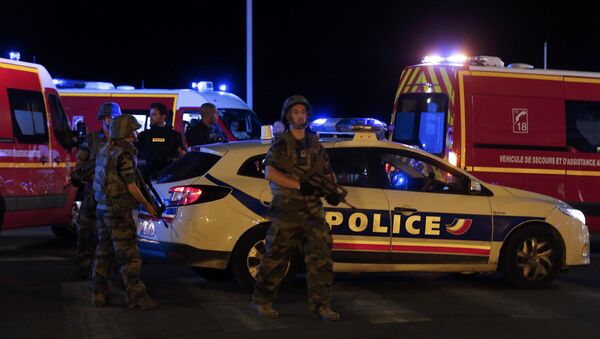 On Friday, in the aftermath of the terrorist attack which left 84 people dead in Nice on Bastille Day, German Interior Minister Thomas de Maziere warned about the dangers of "lone wolf" terrorism, carried out by individuals who don't have obvious links to a terrorist group.

​Maziere appealed to parents, neighbors, colleagues or sports team-mates to be vigilant about radicalization, and pay attention to possible signs.

On Monday, a 17-year-old Afghan immigrant attacked travelers on a train in Wurzburg, Bavaria with an axe and a knife, seriously injuring four people. The teenager said he wanted to kill "unbelievers," and was in possession of radical Islamic material.

However, the security services said they did not have prior information about his radicalization because it had happened so quickly.

Crowds Demand French President, PM Resign at Nice Attack Memorial (VIDEO)
According to Geneva-based economist and geopolitical analyst Peter Koenig, these so called "lone wolf" terror attacks are being exploited by the authorities in Europe and the US to expand their military strategy.

"What the 'Empire' really wants is a totally militarized Europe, and this is gradually being done by having people attack randomly, like in Germany," Koenig alleges.

"Eventually the countries will pass legislation that allows a permanent state of emergency or, what is likely in the case of France, martial law enshrined in the constitution."

"Mr. Hollande has not able to do that so far, so he has been prolonging the state of emergency by three months at a time, but with this Nice attack, I'm pretty sure it will slide through in this parliament like butter," Koenig said.

"Similarly, if Germany does that, others will follow and we will have a totally militarized Europe."

In particular, Koenig accuses the NATO alliance of having links with Islamic terrorists.

"These jihadists, the whole idea of having ISIS/Daesh/Islamic State, is not an idea from the Middle East," Koenig revealed.

"They are supported now by the US, by the European vassal allies, by some of the allies in the Middle East like Saudi Arabia, Qatar and so on, and until recently by Turkey."

"In my opinion, they are the foot-soldiers of NATO in the Middle East, and in Europe too," Koenig alleges.

"Whatever they do in Europe serves NATO's purpose of going to war, of more airstrikes, bombing more of Syria, more of Iraq and therefore destroying the country, but they are not really aiming at Daesh because they are the footsoldiers," he concluded.

000000
Popular comments
and that suggests that nato and militaristic eu members have the initiative in europe over the general population.
michael
21 July 2016, 01:48 GMT
000000
Apart from "unsoundcloud", where to listen to this interview in full length?