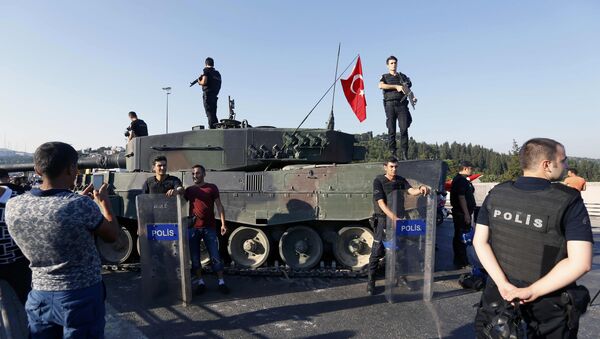 © REUTERS / Murad Sezer
Subscribe
International
India
Africa
The United States categorically rejects media allegations that the US government had any complicity in the failed coup in Turkey, US Department of State spokesperson Mark Toner said in a briefing on Tuesday.

“It’s absurd some of the allegations that are out there, we’ve seen in some of the Turkish media and other media as well,” Toner stated. “It’s absurd to think that the United States was complicit or in any way connected to the events of Friday.”

Turkish officials have called on the Obama administration to extradite cleric Fethullah Gulen for his alleged connection in the coup.

Late on Friday, Turkish authorities said that an attempted coup was taking place in the country. The coup attempt was suppressed by early Saturday. Nearly 300 people were killed and over 1,400 were injured.