Failed Coup Attempt in Turkey Was Most Likely 'Controllable' by Erdogan 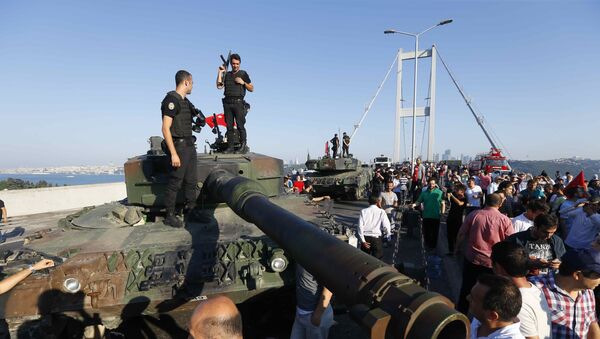 Member of the European Parliament Costas Mavrides said that called the failed coup attempt in Turkey a 'controllable coup.'

Turkish Coup – a Staged Event Aimed at Changing Constitution?
MOSCOW (Sputnik) — The failed coup attempt in Turkey was most likely controllable by country's president in order to replace a number of military officials, academics and judges, member of the European Parliament Costas Mavrides told Sputnik Tuesday.

Earlier on Tuesday, the Turkish Armed Forces confirmed in a statement that they had prior knowledge of a military faction’s coup plot late last week.

“The most probable scenario is that while the involved officers were acting on their own and not under [President Recep Tayyip] Erdogan directions, at the same time, the core inner circle of MIT [Secret Turkish Intelligence] knew all about it and allow it to happen in a 'controllable coup' self-inflicted by Erdogan and being the perfect pretext for him to proceed with his plan, that is total cleansing in all aspects of public life in Turkey, with massive incarcerations, massive dismisses of military officer, judges, academics, journalists, etc.,” Costas Mavrides said.

Goal Reached? Military Coup Attempt Disempowers Turkish Armed Forces
Late on Friday, the Turkish authorities said that an attempted coup was taking place in the country. The coup attempt was suppressed by early Saturday. Turkish authorities have already sacked thousands of people across the country, including members of the armed forces, governors, military advisers, prosecutors, intelligence officers and judges. The Turkish government has accused US-based Muslim cleric Muhammed Fethullah Gulen of having played a key role in the coup.

Almost 300 people were killed and more than 1,400 wounded during the failed coup which saw warplanes fire on key government installations and tanks rolling into Ankara and Istanbul.