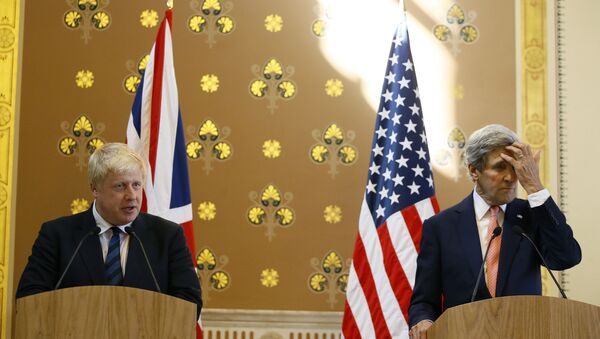 © AP Photo / Kirsty Wigglesworth
Subscribe
International
India
Africa
In a metaphor that could presage the likely relationship between US Secretary of State John Kerry and his new British counterpart, Boris Johnson, the former had an awkward moment at 10 Downing Street on Monday.

Kerry traveled to London to meet with newly-appointed Prime Minister Theresa May and her chosen Foreign Secretary, Boris Johnson.

A former mayor of London, Johnson has an earned reputation for making outlandish statements, and news of his appointment was met with ridicule across the world. US State Department spokesman Mark Toner could be seen stifling laughter.

Secretary Kerry seems to have similar trouble keeping his true feelings in check.

On Tuesday, Johnson was asked by a reporter if he intended to apologize for disparaging remarks he has made about world leaders in the past, now that he is responsible for representing the UK abroad.

"We can spend an awfully long time going over lots of stuff that I’ve written over the last 30 years…all of which in my view has been taken out of context, but never mind, some serious issues call us today," he answered.

Johnson was asked specifically if he planned to apologize for comments he made about US President Barack Obama.

"I’m afraid that there is such a rich thesaurus now of things that I have said that have been one way or another, through what alchemy I do not know, somehow misconstrued that it would really take me too long to engage in a fully global itinerary of apology to all concerned," he said.

In April of this year the newly-appointed foreign secretary came in for strong criticism for accusing Obama of anti-British sentiment after removing a bust of Winston Churchill from the Oval Office.

"Let me just repeat my point, which is that I think people are more than welcome to rake over stuff I’ve written over many, many years but I think [the] most important thing is to get on with the very heavy agenda we have before us today," he said on Tuesday.