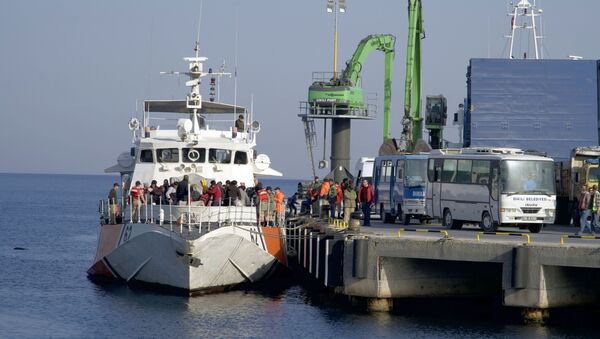 Leading German politicians and business figures believe the EU-Turkey refugee deal is now in doubt because of the recent events in Turkey; 98 percent of those polled by a German newspaper think Turkey's EU membership is out of the question.

MEPs Hold Emergency Talks Over Turkey as Migrant Deal Flounders
A majority of German business and political leaders fear an increase in the number of incoming refugees and migrants amid instability in Turkey, German newspaper Frankfurter Allgemeine Zeitung reported on Tuesday.

According to a poll conducted for the newspaper, 62 percent of respondents agreed with the German government's more restrictive refugee policy, while just 50 percent agreed with last year's "open borders" policy.

In 2015, more than a million refugees and migrants arrived in Europe, but so far during 2016 less than a quarter of that number have arrived.

According to the International Organization for Migration, as of July 13 2016 a total of 248,418 migrants and refugees arrived in Europe since the start of the year, the majority of whom entered by sea through Greece (158,977) and Italy (78,487).

The newspaper poll was conducted by Germany's Allensbach Institute, a respected market research and polling company. It surveyed 506 German business leaders and high-ranking politicians at the federal or state level.

The respondents said that the closure of the Balkan migration route is key to the decline in migration to Europe, but worry that current instability in Turkey may harm the deal the EU reached with Turkey to curb migration.

While 75 percent of respondents support the agreement with Turkey, 63 percent now fear an increase in refugee numbers because of threats to the deal's implementation.

A majority, 60 percent, rejects the institution of a visa-free regime for Turkish citizens, and 98 percent believe that it is impossible for Turkey to meet the conditions for EU membership in the near future.

At an EU-Turkey summit in March 2016 the EU's leaders and the Turkish government agreed that migrants crossing from Turkey to the Greek islands who are not applying for asylum in Europe should be returned to Turkey, and Turkey agreed to control its borders to prevent illegal migration. 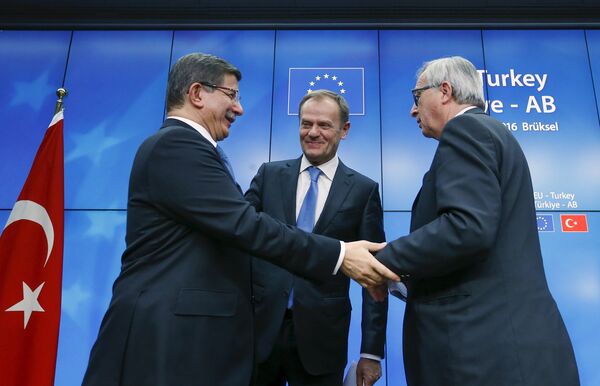 Turkish Prime Minister Ahmet Davutoglu (L), European Council President Donald Tusk (C) and European Commission President Jean Claude Juncker (R) greet each other after a news conference at the end of a EU-Turkey summit in Brussels March 8, 2016.
© REUTERS / Yves Herman
In return the EU promised up to €6 billion ($6.6 billion) in funding for Ankara to pay for refugees living in Turkey, visa-free travel for Turkish citizens, and a "re-energized" EU accession process for the country; last month Chapter 33 opened, which concerns financial and budgetary provisions.

However, in the aftermath of the military coup attempt in Turkey, the EU has expressed discontent with Turkey's political course.

Thousands of arrests have been made since the coup attempt on Friday, and Turkish Prime Minister Binali Yildirim and President Recep Tayyip Erdogan have expressed support for a proposal to reinstate the death penalty for those believed to be traitors against the state.

Failed Turkey Coup May Signal Beginning of the End for NATO, European Union
Turkey has not executed anybody since 1984, and legally abolished the death penalty in 2004 under EU pressure, as part of the accession process which it began in 1987.

In response to Yildirim's statement, German Foreign Minister Frank-Walter Steinmeier said that "reintroduction of the death penalty would prevent successful negotiations to join the EU."

At a joint press conference with US Secretary of State John Kerry on Monday, EU foreign policy chief Federica Mogherini said "no country can become member of the EU if it introduces the death penalty."

For his part, John Kerry said that Turkey's membership of NATO could be in jeopardy if Ankara follows up its threats that coup plotters "must pay," with actions that NATO deems contrary to its beliefs about democracy.