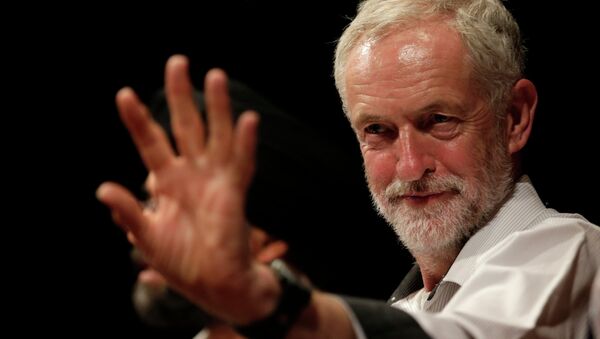 UK Labour Party Jeremy Corbyn has thrown down the gauntlet to his colleagues in parliament following a defiant speech on nuclear weapons during which he was heckled and abused several times by his own colleagues.

The UK Parliament debated the replacement of Britain's fleet of submarines carrying Trident nuclear warheads Monday night (July 18) with both Prime Minister's Conservatives firmly in favor of continuing the program and Corbyn's Labour Party largely joining them to win a majority of 355.

Parliament has just voted in favour of Trident renewal, but earlier today I spoke against the government's motion → https://t.co/9MQt1GkAnU

​However, despite it being official Labour policy to renew Trident — as decided at the full party conference — Corbyn argued against it, brining rebukes from many of his colleagues. It marks a new low in the splits within the party, with Corbyn representing the left-wing anti-war agenda against the majority of Labour MPs who were elected on a center-ground ticket in 2015.

Labour is now facing a leadership battle, between Corbyn and either Angela Eagle or Owen Smith. But it is more than just a leadership battle. It is a battle for the future of the whole party. Corbyn says he has the mandate of the wider membership of the Labour Party, who voted him in in September 2015.

If you want a vote in leadership election you can register as a supporter until 5pm tomorrow https://t.co/PYf0iPFwZjhttps://t.co/UhwXCuoX0v

​His rise to power has come about because of a widespread belief at grassroots level within Labour that former leaders Tony Blair and Gordon Brown took the party too far to the right. His leadership has sparked a huge increase in membership.

According to Britain's Socialist Worker newspaper: "Labour's membership has more than doubled since Corbyn was elected-and more than 130,000 people have joined the party since 23 June, most of them to support him against the right.

"Rallies across Britain in defense of Corbyn have attracted hundreds, and sometimes thousands, of people. All those who support Corbyn are at odds with most Labour MPs, whose contempt for their members is on open display."

The leadership contest — which officially begins Wednesday (July 20) — will last through the summer, with the winner not being declared until September.

Corbyn More Popular Than UK Labour Leadership Contenders
Corbyn is banking on a surge in new members. In the previous leadership vote in September 2015, Corbyn benefited from a huge rise in membership, because people could join and vote for as little as US$4.

This time around, the price of joining and voting is US$33. The battle is now on for Corbyn and the left wing to create a surge in membership to keep him as party leader, while his opponents do the same for their candidate.

If Corbyn wins once again, many of his sitting MPs will argue that he is unelectable, because his left-wing policies are precisely those that kept Labour out of powers from 1979 to 1997, when the party was dominated by the left. That may well trigger a splinter movement, similar to that which happened in 1981, in similar circumstances, when the center ground left Labour to form the Social Democratic Party.