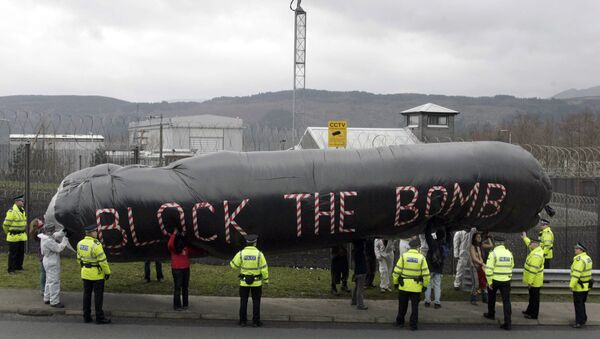 British politicians on Monday will debate and vote on the controversial issue of renewing the country's nuclear deterrent system, known as Trident. While the Conservative government has vowed to renew Trident, there is considerable opposition within UK politics and society.

The Trident system, which consists of four submarines carrying nuclear warheads, was first acquired by the Thatcher government in the early 1980s as a replacement for the UK's previous nuclear deterrent.

The motion, to be put to parliament by new Prime Minister Theresa May, will call for the renewal of Trident, with the current fleet expected to become obsolete within the next 10 to 15 years.

Theresa May says it's 'sheer madness' to give up #Trident. Here's what we think. Retweet if you agree. #StopTrident pic.twitter.com/vD8cxDoIow

The UK's political establishment supports the renewal of Trident, with PM May saying the deterrent is necessary in the current unstable global climate.

"It is impossible to say for certain that no extreme threats will emerge in the next 30 or 40 years to threaten our security and way of life," the prime minister said in a statement.

#Trident debate will be Theresa May's first appearance in Commons as PM. She'll accuse critics of "reckless gamble" with security

​"We cannot abandon our ultimate safeguard out of misplaced idealism."

Proponents of Trident also argue that on top of losing international influence and putting the UK's national security at risk, scrapping the project could result in up to 15,000 jobs being lost in the nuclear defense industry.

Very proud to see my union @gmb_union standing up for skilled jobs in #plymouth by backing Trident renewal. I do too.

​Conservative MPs, along with a majority of Labour lawmakers are expected to vote in favor of renewing the system.

While the political and military establishment supports Trident's renewal, there has been a vocal campaign pushing for the UK to scrap its nuclear weapons, with Labour party leader Jeremy Corbyn among the most high-profile critics.

It's not a fringe demand, it's the new common sense. @jeremycorbyn addressed the huge #StopTrident rally. #Trident pic.twitter.com/LdVZgiRmlM

Anti-Trident campaigners argue Britain should set an international example by scrapping its nuclear warheads, pointing to commitments made under the Nuclear Non-Proliferation Treaty.

Will join almost every single other Scottish MP in voting against Trident renewal today #WMD pic.twitter.com/eIIJttHRf1

​There are also domestic arguments, with critics saying that costs to renew Trident could be better spent on social projects during this time of UK austerity.

The cost of replacing #Trident has almost tripled since 2009. Let's #StopTrident — join us https://t.co/C7PdHHmBdE pic.twitter.com/qCVjevYakV

While the UK government estimates replacing Trident would cost US$54 billion (£41bn), critics such as the Campaign for Nuclear Disarmament (CND) believes costs could be as high as US$270 billion (£200bn).

​"Many people feel that it's not the best use of taxpayers' money and national resources. They'd rather see it spent on heath, education, jobs and so on," CND general-secretary Kate Hudson told Sputnik.

I’m happy to keep Trident as long as we rename it 50,000 New Nurses Or 1 Million Affordable Homes Plus New Schools And Hospitals.

​While the Labour party is deeply spit on the matter of Trident, it is expected that leader Jeremy Corbyn and his supporters, along with the Scottish National Party (SNP) and Green MP Caroline Lucas will vote against Trident's renewal.

MPs will hold a debate on the issue with a vote expected on Monday (July 18) evening.