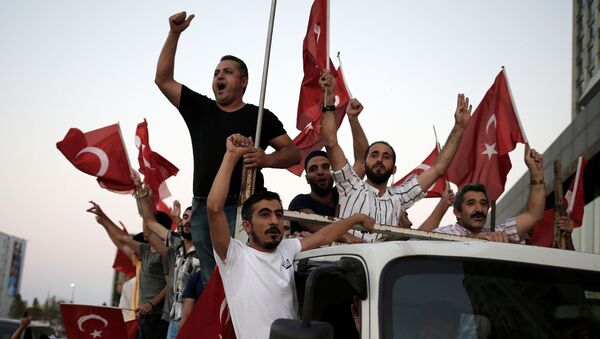 High-ranking Turkish officials have been visibly discontent with the United States following the unsuccessful attempt to overthrow President Recep Tayyip Erdogan on July 15. Islamic cleric Fethullah Gülen, who has lived in the US since 1999, is at the center of the rift that will further complicate relations between Washington and its NATO ally.

World
Turkish President Orders Patrolling Flights Over Country
Ankara wants the US to extradite the influential Muslim preacher, whom the Turkish president and his supporters accuse of masterminding the coup. Gülen has denied these charges.

Erdogan made a direct appeal to US President Barack Obama in the hours following the Friday night violence. "I'm once again calling on you, I'm saying: Extradite this man in Pennsylvania to Turkey now," he said.

Turkey's Prime Minister Binali Yildirim went further, saying that "any country that stands behind [Gülen] is no friend of Turkey" and "is engaged in a serious war with Turkey." Labor Minister Suleyman Soylu maintained that Washington is to blame for the putsch. "The US is behind the coup attempt. A few journals that are published there have been conducting activities for several months," he said.

Washington has denied any involvement in Friday night's violence. US State Secretary John Kerry called any such claims "utterly false and harmful" to bilateral relations.

"The unusual exchange" between Turkish and US officials "exposed longstanding tensions between the two governments over a range of issues spanning civil liberties, governance and the international campaign against [Daesh], which were forced to the surface in the wake of the coup attempt," the Wall Street Journal asserted.

NATO R.I.P. (1949-2016): Will Turkey-US Rift Over Gulen Destroy Alliance?
The military coup took place on Friday night when a group of mid-level military officers tried to seize power in Turkey taking key sites in Istanbul and Ankara under control. The authorities largely overturned the insurrection by Saturday morning. More than 6,000 people have been arrested in the wake of the failed power grab, yet questions remain as to who was behind it.

Anna Glazova, the head of the Center for Asia and the Middle East at the Russian Institute for Strategic Studies, does not think that it was Gülen.

"In recent years, Erdogan blamed Gülen when any events aimed against Turkey's ruling party took place. This was true in the wake of a major corruption scandal that implicated Erdogan's close associates. [The Turkish president] immediately pinned the blame on Gülen supporters. This could have been true. There are many Gülen followers in Turkey. Some were jailed, but others keep playing a major role in politics," she told Svobodnaya Pressa.

The analyst further noted that the army has traditionally tried to protect Turkey's secular development and is against Islamist tendencies. This is why she doubted that the Muslim cleric was behind the coup.

World
2,000 Police Troops Summoned in Istanbul, Ordered to Down Helicopters
Yet Erdogan, in her opinion, had no other choice than to blame Gülen.

"If he blamed someone else then it would have become obvious that the coup plotters were genuine patriots. People were against political repressions, encroachment on the freedom of speech, Islamization of the country, support for terrorists in Syria and the war [against the Kurds] in Turkey's southeast. It was clearly an attempt to stop negative trends and set Turkey on its previous path" established by Mustafa Kemal Atatürk, she said.

The analyst also mentioned that coup plotters might have been in contact with western secret services, but nothing could be said for sure. She also pointed out that the coup attempt came as a surprise to Turkey, the US and the international community.