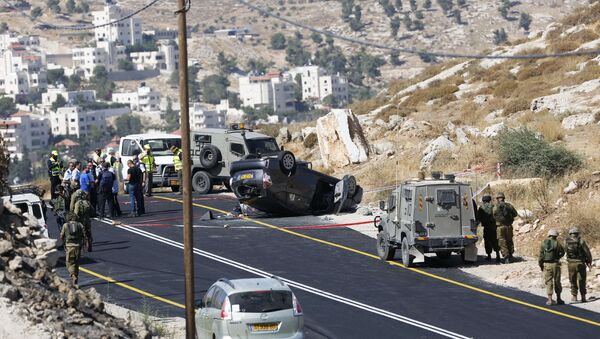 © AP Photo / Nasser Shiyoukhi
Subscribe
Palestinians rioted Monday as members of Israel's military destroyed the home of a West Bank resident accused of being involved in a February attack outside Jerusalem's Old City, in which a policewoman was shot and killed.

Israel-Palestine Talks Reach Progress at Paris Meeting
Nighttime clashes erupted in the town of Qabatiya, in the north of the occupied West Bank, as a military bulldozer moved to demolish the family home of Bilal Abu Zeid, accused of having assisted Palestinian attackers in a February 3 incident outside the Old City's Damascus Gate.

According to Israeli authorities, Abu Zeid, currently in an Israeli prison, supplied a gun and transported the three Palestinians who killed 19-year-old Hadar Cohen in a shooting and stabbing attack. The attackers were killed at the scene and their homes in the town of Kabatiya, in the Jenin area, were demolished some two months later.

A military convoy attempting to demolish Abu Zeid's home was attacked by Palestinians armed with pipe bombs and improvised weapons. The troops responded to the attack, shooting three Palestinians, according to Israeli army claims.

Israel routinely destroys the homes of Palestinians, in what Israeli Prime Minister Benjamin Netanyahu considers a deterrent to violence. The demolitions receive routine condemnation from various rights groups, as they harm families, deprive children of shelter, and cause innocents to pay for the crimes of others.

Delegation of Italian Deputies Slams Israel for Barring Entry to Gaza Strip
Earlier this month the High Court of Justice rejected an appeal by Abu Zeid's father against the demolition of the family home, where the accused lived with his parents and siblings, including two minors.

Since October, around 10 Palestinians from Qabatiya have been killed while attacking Israelis.

Violence in Israel and the state of Palestine since October 2015 has killed at least 215 Palestinians, 34 Israelis, two Americans, an Eritrean and a Sudanese.