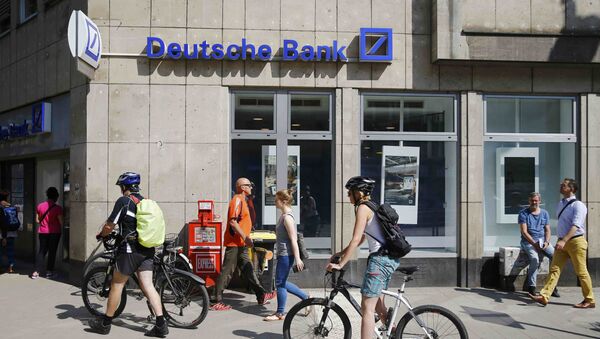 In June, the International Monetary Fund (IMF) labelled Deutsche Bank as the most risky global financial institution. Experts do not believe the bank will suffer the same destiny as Lehman Brothers. But if it does this would be a global financial catastrophe.

In late-June, the IMF stated that Deutsche Bank is the most important net contributor to systemic risks among the global systemically important banks, The Wall Street Journal reported.

Moreover, the United States Federal Reserve reported that the US subsidiary of the bank had failed a stress test due to poor risk management and financial planning. A total of 33 banks were tested, and two of them, Deutsche Bank and Santander, failed.

The news pushed Deutsche Bank shares to a 30-year low, to €12.37 per share. Western experts warned that the bank could share the destiny of Lehman Brothers. It was declared bankrupt in 2008, having triggered a global financial crisis.

The German financial sector plays a key role in the global economy. According to the IMF, the German asset management market is the third-largest in Europe. Germany’s sovereign bond market is a safe haven for investors.

US Banking Authorities Fine Deutsche Bank $258Mln
There are 2 of the 30 global systemically important banks in Germany, Deutsche Bank and Allianz SE, according to a report by the Financial Stability Board.

Germany also has one of the world’s largest derivative exchanges, Eurex Exchange, as well as a multitude of smaller bank and financial companies.

According to the IMF, in Germany, Deutsche Bank is linked with other publicly traded banks and insurance companies and could be a source of their financial contagion.

If the situation in the German financial system deteriorates it is very likely to trigger a chain reaction and a global banking crisis. However, the possible aftermath for the global banking system is expected to be more serious than for German banks, the IMF warned.

"In particular, Germany, France, the UK and the US have the highest degree of outward spillovers as measured by the average percentage of capital loss of other banking systems due to banking sector shock in the source country," the report read.

IMF Warns Federal Reserve Against Rate Hikes Amid Banking Contagion
In 2009, Deutsche Bank CEO Josef Ackermann said that the bank had enough money to survive the crisis. But in 2012, some of his colleagues said that the bank hid €12 billion of losses from operations with derivatives.

The first warnings that Deutsche Bank could declare bankruptcy emerged in 2013 when the bank said it needed additional capital. In 2013, it attracted $3 billion through issuing shares for its stakeholders.

In April 2014, the bank attracted an additional €1.5 billion. Several months after, the bank announced it was selling €8 billion worth of shares, with a 30 percent discount. This was a big surprise for the market.

Financial Crisis in This EU Country May be Bigger Problem Than Brexit
In March 2015, a stress test revealed that the bank again needed additional capital. During the crisis the bank manipulated with LIBOR and, in April 2015, it was fined for $2.5 billion. At the time, S&P downgraded Deutsche Bank from A to BBB+, three positions above the junk rating.

In early June 2016, Deutsche Bank was again involved in a scandal over LIBOR manipulation. The case involved at least 29 personnel who worked in London, Frankfurt, Tokyo and New York.

Last year, Deutsche Bank reported a net loss of €6.8 billion for the first time since 2008.

In recent years, the bank has made attempts to reorganize operations. In October 2015, co-CEO John Cryan launched a large-scale restructuring but it has not gained significant results. In the first quarter of 2016, Deutsche Bank reported that net profits had dropped 58 percent, to €236 million.

New Debt Crisis Beckons for 'Unstable' German Banks in EU's Next Meltdown
When in 2008 Lehman Brothers filed for bankruptcy it had $639 billion in assets and $619 billion in debt, according to The Street website.

In May, Berenberg Bank said that Deutsche Bank had a leverage (the ratio of total assets to shareholder’s equity) of 40 to 1.

"The biggest problem is that DBK [Deutsche Bank] has too much leverage. On our measures, we believe DBK is still over 40x levered," analyst James Chappell was quoted as saying by Zero Hedge.

"Facing an illiquid credit market limiting Deutsche Bank's ability to deliver and with core profitability impaired, it is hard to see how [the bank] can escape this vicious circle without raising more capital. The CEO has eschewed this route for now, in the hope that self-help can break this loop, but with risk being re-priced again it is hard to see [Deutsche Bank] succeeding," he added.

Since the beginning of the year, Deutsche Bank shares have dropped by 50 percent amid investors’ concerns over the possible lack of liquidity.
As for July 15, the bank had a market cap of only €18 billion. Its net value is 60 billion euros, according to BBC.

At the same time, the nominal value of derivatives that Deutsche Bank holds on its books is $72.8 trillion.

"What is astounding about this, is that a single bank owns 13% of the total outstanding global derivatives, which was a staggering $550 trillion in 2015," according to The Street.

However, the article noted, this situation does not mean that the bank will have a default of a trillion dollars because most of the contracts are covered by counterparties.

"However, when the domino effect is put into motion, we have already witnessed how it can engulf the entire world," The Street warned.

Comparison of Deutsche Bank with Lehman Brothers is not totally correct. However, if such a major player as Deutsche Bank declares bankruptcy it would start a chain reaction, Natalia Orlova, senior economist at Russia’s Alfa Bank, told RBK.

Alexander Orlov, managing director of Arbat Capital, agreed that the risk of Deutsche Bank going bankrupt is low. But if this happens the consequences could be much more serious than in 2008.

"The aftermath would be disastrous. But the question is whether it is possible. Currently, the risk is much lower than it was with Lehman Brothers. Deutsche Bank meets the capital requirements. The fact that it has failed two tests of the US Fed does not mean the bank has problems. In Europe, the bank has usually passed tests," Orlov pointed out.

According to him, there is also a chance that Deutsche Bank will receive additional capital.

Int'l Banks Agree to Help London Retain Position of World Financial Hub
The decision of the British voters to leave the EU could have a negative impact on the bank.

Deutsche Bank is the biggest European bank working in London.

According to Bloomberg, in May, CEO John Cryan said the bank was considering moving business from London.

"Moving operations, which are handled by 8,000 members of the staff, will not be an easy task for Deutsche Bank and will further weaken its balance sheet," according to The Street.

In addition, Brexit could have a negative impact on Deutsche Bank’s large stock of "level 3" assets, including complex derivatives and loans to private equity deals. In late-March, those assets reached €31 billion.

"This is sharply lower than the €88 billion Deutsche held in December 2008, and insiders say that the bank has become 'very prudent' in level 3 valuations in the last year," an article in The Financial Times read.

Level 3 assets are very hard to value based on market prices and hard to sell. According to Amit Goel, a bank analyst at Exane, after Brexit these assets are going to be harder to sell.