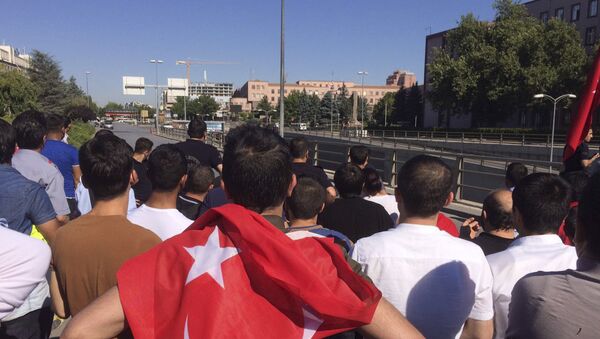 Plans to restore death penalty in Turkey after a coup attempt in the country are "unacceptable" for the European Union, Austrian Foreign Minister Sebastian Kurz said.

MOSCOW (Sputnik) —Late on Friday, Turkish authorities said that an attempted coup d'etat took place in the country. The coup was suppressed several hours later. Soon after the coup attempt, both Turkish President Recep Tayyip Erdogan and Prime Minister Binali Yildirim said that capital punishment could be reinstated in the country.

"Of course, the introduction of a death penalty would be absolutely unacceptable. Turkey should have a clear understanding that preservation of death penalty is rejected by us as a cruel and inhumane form of punishment," Kurz said, as quoted by the Austrian newspaper Kurier on Sunday, answering a question about possible Brussels' response to the potential introduction of capital punishment.

Erdogan Not Ruling Out Death Penalty For Coup Supporters
He added that despite the coup attempt, people, involved in it, should be punished within the legal framework.

The coup attempt was suppressed by early Saturday, with Yildirim stating that all coup supporters were identified and would be apprehended as the country was returning to normal life. Over 290 people have been killed and at least 1,400 injured during the attempted coup, according to the country's Foreign Ministry.

Death penalty was abolished in Turkey in 2004 to bring its legislation in line with the EU standards.