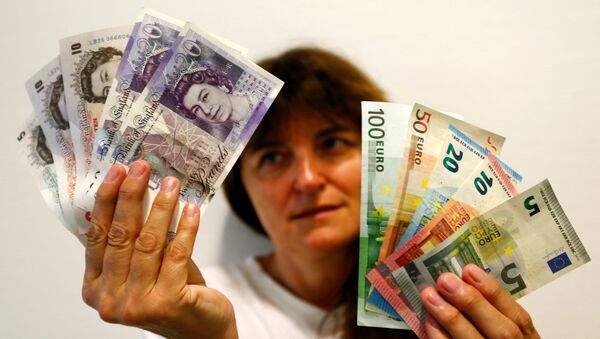 The United Kingdom's economy will face a significant short-term shock in the wake of June's Brexit referendum, with the annual GDP growth rate revised downward and forecast to plunge to less than 0.5 percent next year, the Ernst & Young audit firm's ITEM Club forecasting group said Monday.
Post-Brexit UK Economy May Shrink Defense Budget - Joint Security Committee
MOSCOW (Sputnik) — Uncertainty over the UK exit from the European Union persists as the country's government delaying triggering Article 50 of the EU Lisbon Treaty that would initiate the formal process of withdrawal from the bloc and start talks with the EU leaders on the new format of their relations, including a possible free-trade agreement.

"There are likely to be severe confidence effects on spending and business investment, resulting in anemic GDP growth for at least the next three years…The EY ITEM Club is forecasting GDP growth of 1.9% this year (down from the 2.3% it predicted in April) and expects growth of just 0.4% in 2017 (down from 2.6%) and 1.4% in 2018," the EY ITEM Club said in a press statement after the release of its summer forecast.

The uncertainty is holding back investment and is undermining consumer confidence, the ITEM Club said, noting that business investment is expected to fall 0.9 percent this year and 2 percent in 2017. Previously, Ernst & Young forecast investment rising to 3.2 percent and 7.8 percent respectively.

UK Democracy, Economy Under Pressure After ‘Earthshaking’ Vote to Exit EU
Rising inflation and unemployment will be the result of the turmoil, the forecast added.

On the positive side, the UK pound's recent 10-percent fall against the dollar and euro is expected to drive exports, and the Monetary Policy Committee (MPC) is expected to reduce interest rates to zero, according to the report.