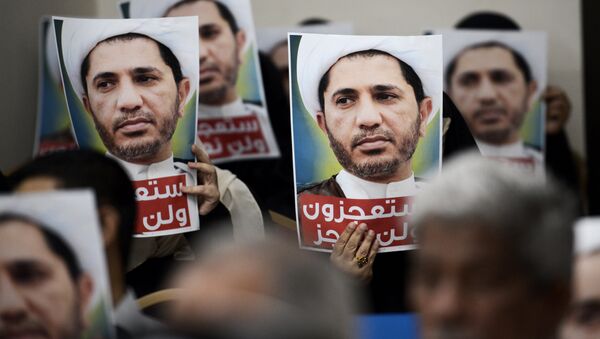 © AFP 2021 / Mohammed Al-Shaikh
Subscribe
A Bahrain Court has ordered the country’s main opposition group, Al-Wefaq, to be dissolved and its assets liquidated, in a move denounced by critics as one of one of the biggest crackdowns on civil activism in recent times.

The Bahraini High Civil Court's ruled Al-Wefaq should be dissolved, accusing the group of expressing "solidarity with suspects convicted of instigating hatred of the political regime," "calling for a coup d'état and demeaning the judiciary and executive bodies," and pushing for "demonstrations and sit-ins that could lead to sectarian strife in the country."

The decision comes after a court last month suspended Al-Wefaq from any political activity, in a series of attempts to shut down political opposition.

​While using force to crush protests associated with the Arab Spring of 2011, an appeals court in May more than doubled the sentence of Al-Wefaq general secretary Sheikh Ali Salman, who had previously been convicted of charges relating to political incitement and insulting the interior ministry.

The European Parliament condemned Al-Wefaq's suspension calling for "an immediate halt to the suppression of different political opinions in the country and the repression of their leading representatives, regardless of their political or religious affiliation."

The latest development to dissolve the group has been slammed by critics, described as a "further repression of freedom" in a joint letter signed by NGOs, including the Bahrain Center for Human Rights (BCHR) and the Bahrain Institute for Rights and Democracy (BIRD).

"We, the undersigned NGOs, strongly condemn the escalation of the Bahraini government's attacks on political societies, and its repressive acts against all forms of peaceful dissent," the letter reads.

​The NGOs have taken aim at legal processes in the Gulf kingdom, which has a Sunni government, but a majority Shia Muslim population, saying that Al-Wefaq representatives had not been given a proper opportunity to defend their case.

"Despite the prevention of proper, or even adequate, legal representation, and the refusal of access to important documents to form defense pleading… the Bahraini judiciary took the decision to irrevocably dissolve Al-Wefaq and liquidate its assets after just one month since its closure."

Pressure on UK, US to Act

The criticism has also led to calls for Bahrain's western allies, the US, UK and EU, to publicly denounce the crackdown on political dissidence.

Despite allegations of human rights breaches, Bahrain remains a key ally for the West, hosting the US Navy's Fifth Fleet, while plans have been established for the creation of a British Naval base in the kingdom.

@BorisJohnson I am deeply concerned by the decision of the Bahraini High Administrative Court to dissolve Al #Wefaq. #Bahrain

​NGO Bahrain Center for Human Rights called upon the US, Britain and the EU to "denounce the government of Bahrain's actions, immediately suspend arms sales to Bahrain, and to urge it to call off the decision to dissolve Al-Wefaq Society, and to respect the rights to freedom of association."