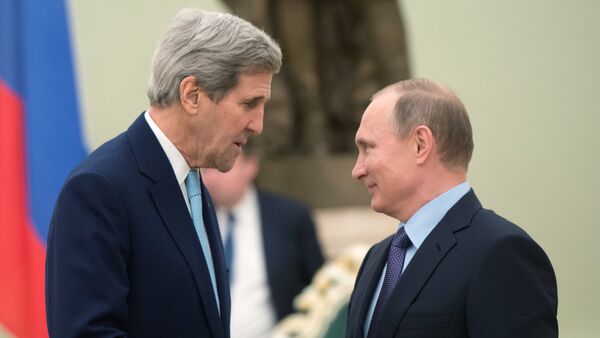 © Sputnik / Sergey Guneev
/
Go to the mediabank
Subscribe
International
India
Africa
Since the United States needs cooperation with Russia on Syria Washington would have to make concessions to Moscow, including the removal of sanctions in the long run, an article in The Wall Street Journal read.

Obama Running Out of Time to Reach Deal With Moscow on Syria
Recently, US Secretary of State John Kerry has been a frequent visitor to Russia. Washington is increasingly demonstrating readiness to cooperate with Moscow on the Syrian settlement.

According to media reports, during the recent visit, Kerry offered Russia to establish a joint US-Russian group to share operative information and intelligence data to coordinate actions against terrorists.

Moscow is unlikely to accept the deal since coordinated actions on the Syrian settlement would require partnership between Russia and the US. And partnership is impossible amid sanctions.

As a result, the US may soon be ready to remove sanctions in exchange for a joint plan on Syria, the article read.

Russia has reasons for optimism because the US has become flexible on the issue. A year ago Washington ruled out any cooperation with Russia in the Middle East. However, since then Russia’s approach to Syria has proved its effectiveness.

Could US-Russia Agreements Play Key Role to End Syrian War?
In addition, the determination of the European Union to keep the sanctions in place is now challenged, especially after the US has focused on Syria and outsourced the Ukrainian settlement to Germany. Thus, Russia hopes that its participation in the Syrian settlement would sway Washington and Berlin toward a more accommodating line, the article read.

John Kerry was in Moscow when a terrorist attack in France’s Nice occurred.

Many experts stressed that the fight with terrorism requires global efforts, including cooperation between the US and Russia.

"Currently terrorism is global. Terrorist cells are not only in Syria, they are across the globe. In order to defeat terrorism we need global cooperation," political analyst Georgiy Fedorov told the Russian online newspaper Vzglyad.

According to him, the US applies double standards. On the one hand, Washington wants to cooperate against terrorists. On the other hand, it undermines Russia’s counterterrorism activities and imposes sanctions which only deepen tensions.