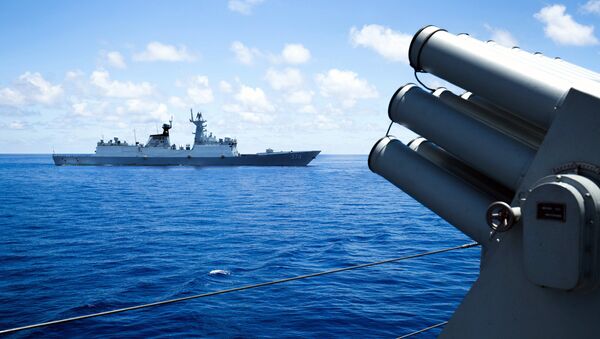 © AFP 2021 / STR
Subscribe
The Hague-based Permanent Court of Arbitration ruled that China has no legal basis to claim historic rights to resources in the South China Sea. China called this decision 'invalid'.

South China Sea Ruling is Important to US National Security
Despite China’s rejection of the decision, several countries including the US have been pressuring China to accept the void verdict under the banner of “respect for law”.

Ever since the Philippines filed the South China Sea arbitration, the US, Australia, Japan and some other countries accused China of violating international law.

According to China's People's Daily newspaper, “This tough talk only exposed their dirty strategic motives. Such tricks are not able to cover the legitimacy of China’s stances, nor alter the strong support to China from those international forces standing for justice.”

The publication further mentioned that the above countries adopted a completely different attitude when they were involved in issues related with the international rule of law. Hence, such sharp contrast speaks for their hypocrisy and unpredictability.

“They supported international judicial rules that they can benefit from, but trampled on that not in favor of them ,” the newspaper wrote.

The publication mentioned that the US has never been accused under UNCLOS because Washington never approved the law, an article on Foreign Affairs wrote in an ironic tone.

“Back in the 1980s, Nicaragua charged the US with taking military and paramilitary actions in and against Nicaragua and violating the sovereignty of Nicaragua in the International Court of Justice (ICJ).”

The ICJ ruled in favor of Nicaragua and gave reparations to Nicaragua. But the US, with a tough attitude, declined participation in the events and overruled the verdict delivered by the ICJ.

The US later obstructed enforcement of the judgment by the UN Security Council and banned Nicaragua from obtaining any definite compensation.

“The same goes for Australia, which always wants to follow the ‘international police’ posture. When concluding maritime rights treaties with Timor-Leste, the Australian government unilaterally rejected such articles concerning maritime delimitation and third-party dispute settlement procedure. Without any other options, Timor-Leste had to file for arbitration to overrule the validity of the treaty,” People’s Daily reported.

How the Hague Ruling on South China Sea May Turn Asia Pacific Into Hotbed
In order to stop Timor-Leste from initiating the arbitration, the Australian intelligence agency went as far as searching the legal representative office of Timor-Leste in Australia, delaying documents and stopping witnesses from appearing before the tribunal.

Another country which is no stranger to violating international law is Japan. Its whale-hunt in Antarctica was ruled as breaching the International Convention for the Regulation of Whaling by the ICJ, which ordered Japan to stop distributing whaling permits in the South Pole.

“Though talking a good talk about respecting the verdict, the Japanese government did not match its actions with words. No effective measures were taken to curb domestic whaling.”

At the commemoration marking the 60th anniversary of the "Five Principles of Peaceful Co-existence," Chinese President Xi Jinping pointed out that all countries should advance the rule of law in international relations together.

“We should urge all parties to abide by international law and well-recognized basic principles governing international relations and use widely applicable rules to tell right from wrong and pursue peace and development,” People’s Daily reported Xi Jinping as saying.

According to the publication, unlike Western countries who selectively apply international law, China always applies “the spirit of the international rule of law in its diplomatic practice.” So far, China has established over 23,000 bilateral agreements and joined more than 400 multilateral treaties.

In January 2013, the Philippines filed a suit against China, claiming that Beijing had violated the UN Convention on the Law of the Sea by its actions in the South China Sea. China refused to participate in the case.

Last week, the Hague-based Permanent Court of Arbitration ruled that China has no legal basis to claim historic rights to South China Sea resources and violated the sovereign rights of the Philippines in the country’s exclusive economic zone.

000000
Popular comments
The International Court of Justice ruled in favor of the Seminole Native Americans that the USA had no legal basis to claim possession of Florida, Alabama and Georgia. The USA just ignored the ruling, and wouldn't even mention the verdict in it's news media.

Alektrion
17 July 2016, 23:54 GMT2
000000
Court decisions are based on language. What IS the law question. What Jurisprudence will say. And ultimately jurisdiction. Since when an arbitrary court is concern with ANY territorial disputes. The decision was about the way China presents it's case. In other words for ALL I seen, and heard is about China right to preserve the claim model. Hence, historical reference. That's FAR from a judgement. Is an opinion IF this is true. Unless some are pulling my hair. Apparently, the court passed an opinion, that China cannot use the historical rhetoric to pass claims over China sea. Now that doesn't mean , or grants NO ONE proprietorship. NO ONE said that the court granted ownership to NO ONE.. Thus JAPAN and U>S and the rest are just a CHORUS ON NOT BROADWAY.. Or in MOSCOW. They just cheerleaders. And JAPAN is a U.S VASSAL. Further, trying freedom of navigation INSIDE the area in question could trigger WW3. China IS powerful and many will side her. And may end in the worst case scenario.
cast235
17 July 2016, 22:57 GMT
000000
Newsfeed
0
New firstOld first
loader
LIVE
Заголовок открываемого материала
Access to the chat has been blocked for violating the rules . You will be able to participate again through:∞. If you do not agree with the blocking, please use the feedback form
The discussion is closed. You can participate in the discussion within 24 hours after the publication of the article.
To participate in the discussion
log in or register
loader
Chats
Заголовок открываемого материала
Worldwide
InternationalEnglishEnglishMundoEspañolSpanish
Europe
DeutschlandDeutschGermanFranceFrançaisFrenchΕλλάδαΕλληνικάGreekItaliaItalianoItalianČeská republikaČeštinaCzechPolskaPolskiPolishСрбиjаСрпскиSerbianLatvijaLatviešuLatvianLietuvaLietuviųLithuanianMoldovaMoldoveneascăMoldavianБеларусьБеларускiBelarusian
Transcaucasia
ԱրմենիաՀայերենArmenianАҧсныАҧсышәалаAbkhazХуссар ИрыстонИронауОssetianსაქართველოქართულიGeorgianAzərbaycanАzərbaycancaAzerbaijani
Middle East
Sputnik عربيArabicArabicTürkiyeTürkçeTurkishSputnik ایرانPersianPersianSputnik افغانستانDariDari
Central Asia
ҚазақстанҚазақ тіліKazakhКыргызстанКыргызчаKyrgyzOʻzbekistonЎзбекчаUzbekТоҷикистонТоҷикӣTajik
East & Southeast Asia
Việt NamTiếng ViệtVietnamese日本日本語Japanese俄罗斯卫星通讯社中文（简体）Chinese (simplified)俄罗斯卫星通讯社中文（繁体）Chinese (traditional)
South America
BrasilPortuguêsPortuguese
NewsfeedBreaking
23:18 GMTUS Judge Denies Giuliani’s Request to Return, Destroy Seized Evidence, Reports Say
23:16 GMTFrench Court Finds Man Guilty of Cartoons Portraying Macron as Hitler Over COVID-19 Policies
23:04 GMTAustralia's Great Emu War: How a Nation Declared War on a Bird and Lost
23:00 GMTBlinken Vows to ‘Keep Normalization Marching Forward’ on One-Year Anniversary of Abraham Accords
22:39 GMTEx-Algerian President Abdelaziz Bouteflika Reportedly Dies Aged 84
21:51 GMTAct of Sabotage Results in Power Outage in Damascus, Energy Minister Says
21:35 GMTOld Friends Are Not the Best?
21:08 GMTMilley Assured Pelosi That US Military, Not Trump, Controlled the Nukes, Vice Chairman Says
21:05 GMTFed. Chief Powell Orders Sweeping Ethics Review Amid Trading Scandal at Federal Reserve
20:38 GMTBiden to Convene COVID-19 Summit on Margins of UN General Assembly
20:30 GMTFootball Legend Pele 'Rushed Back' Into Intensive Care Days After Colon Cancer Surgery
20:21 GMTRussia Possesses ‘Unbelievable Military Power’ After Transforming Forces, US General Says
20:20 GMT‘Irony of Historical Proportions’: Iran Ex-FM Zarif Muses on US Deal to Sell Australia Nuclear Subs
19:47 GMTPrince Andrew Has a Week to Challenge Court Ruling to Serve Papers Amid Procedure Disagreements
19:43 GMTFDA Panel Votes Against Offering Pfizer Booster Shots for COVID-19 to Most Americans
19:37 GMTFrance Recalls Ambassadors From US, Australia for Consultations over AUKUS Alliance
19:34 GMTUS Prosecutors Reportedly Plan to Charge Ex-Boeing Employee for Concealing Truth About 737 MAX
19:28 GMTAlt-Right Proud Boys Warn Members to Avoid 'Trap' of Washington DC Rally
19:18 GMTTrump Sends Letter to Top Georgia Officials Demanding to End 'Illegitimate' Biden's Presidency
19:18 GMTTaliban Reportedly Ditches Women's Ministry in Favour of 'Ministry of Virtue and Vice'