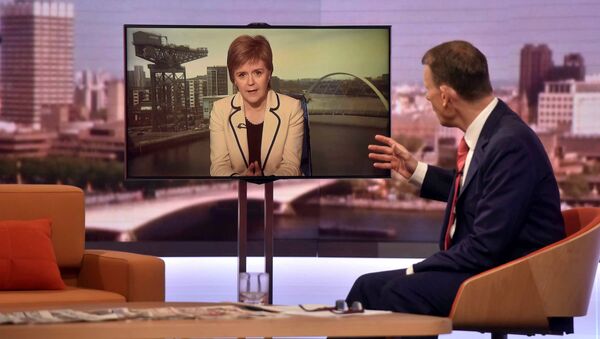 © REUTERS / Jeff Overs/Courtesy of the BBC/Handout
Subscribe
According to Scottish first minister, the country may stay both in the UK and the EU.

Theresa May Heads for Scotland Amid Referendum Calls After Brexit
MOSCOW (Sputnik) — Scottish First Minister and leader of the Scottish National Party (SNP) Nicola Sturgeon said on Sunday she did not rule out Scotland remaining both part of the United Kingdom and the European Union.

"There might be [an opportunity]. We are in uncharted territory, and when you're in uncharted territory with effectively a blank sheet of paper in front of you then you have an opportunity to think things that might previously have been unthinkable and shape the future. So I think there are opportunities," Sturgeon told the BBC in an interview answering a question if it would be possible for Scotland to remain in the European Union as part of the United Kingdom.

On June 23, a referendum was held in the United Kingdom, in which 51.9 percent of voters supported a withdrawal from the European Union. The Scottish National Party, led by Sturgeon, is pressing for a deal that would see Scotland remain part of the EU after 62 percent of Scottish voters backed remaining in the bloc in the Brexit referendum.

In June, Sturgeon pledged to secure a special status for Scotland in relations with the European Union after the Brexit referendum.