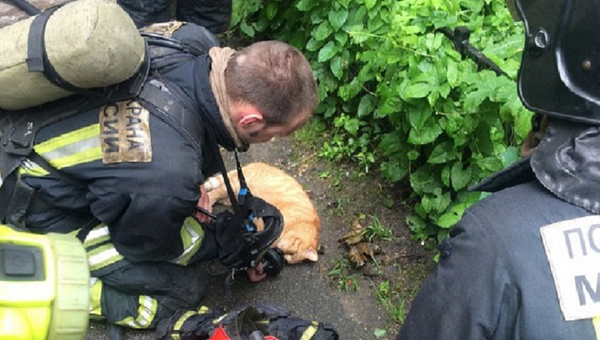 © Photo : Vk.com
Subscribe
The story of a ginger cat rescued in St. Petersburg has won over millions on social media. The firefighters who rescued it are being hailed as heroes for not just saving the cat but also placing an oxygen mask on it upon rescuing.

Black Cat Fever: Feline Inspires Rugby Fans
The cat was taken out from a burning apartment on Obrucheva Street in Saint Petersburg. Firefighters took out the cat from the apartment and even gave it an oxygen mask for breathing.

Photos of the three firefighters fussing over the cat lying on the ground appeared on the Russian popular social network VKontakte.

“Fire on the street Obrucheva 8, kitchen on the first floor has burnt, no further comment,” the author of the post under the photos had written.

Within just 15 minutes the post generated 250 likes and over 100 comments. All of them were unanimously praising the act of three adult men who treated the cat with such care.

“Most humane man! More men like this!” read one of the comments under the photo.

“Well done guys, one must value all life”

“There are still men one can be proud of!”

“Thank you, man!” another person wrote.

One user wrote that the photo was very moving and touching and the firefighters were real heroes who did not shoot videos recording their heroic gestures, neither did they seek publicity by “shouting” about their courageous activities.

Some other users commented on the post expressing concern for the cat’s life.

“Cat is alive and doing well,” replied the author of the post.