Over 450 Russian Tourists Transported From Antalya, Istanbul to Russia 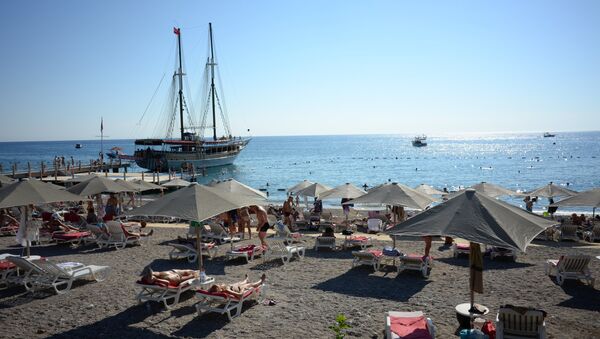 More than 450 Russian tourists have been transported from Istanbul and resort city of Antalya back home on Sunday following a coup attempt in the country, the Russian Ministry of Transport said.

Russian Tourists Unfazed by Turkish Turmoil
MOSCOW (Sputnik) — The statement added that it is planned to carry out 11 additional flights from Istanbul, Ankara and Antalya to Moscow, Kazan, Sochi, Begishevo, Krasnodar, Yekaterinburg, Nalchik, Ufa and Rostov-on-Don.

"On July 17, 2016, five planes of various Turkish airlines flown 450 Russian tourists from Istanbul and Antalya to Moscow, St. Petersburg, Krasnodar and Makhachkala," the ministry said in a statement.

Friday's coup attempt in Turkey was suppressed by early Saturday, with Turkish Prime Minister Binali Yildirim stating that all coup supporters were identified and would be apprehended as the country was returning to normal life. Over 290 people were killed and hundreds were injured during the crisis, while nearly 6,000 people have already been detained.