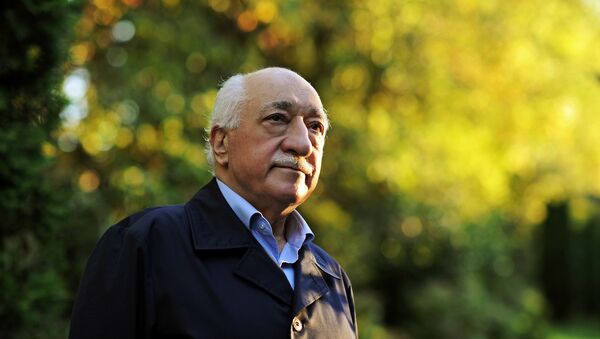 Recep Tayyip Erdogan said that the attempted coup in Turkey was organized by people living in the United States. In particular, he accused the social activist and cleric Fethullah Gülen and urged Obama to extradite him to Ankara.

At Least 6,000 Arrested in Wake of Turkey's Failed Coup - Justice Minister
Fethullah Gülen is a cleric who leads the global Hizmet movement from exile in Pennsylvania, United States. He is a critic of Recep Tayyip Erdoğan and remains influential in Turkish affairs.

Gülen was born on April 27, 1941 in the Turkish village of Korucuk. When he was 10 years old he became a professional reciter of the Qur'an and in 1959 he was appointed the second imam of the mosque Jami Uchsherefli in Edirne.

At 20 years, Gülen started his military service in Ankara, but just three years later he returned to Edirne, where he took office as a Koran teacher and became an imam at a mosque called Darulhadis.

Until September 12, 1980, Gülen was a preacher in a number of towns, up until there was a military coup in Turkey after which he went on a vacation. In 1981, Fethullah resigned from his position as a cleric.

Gülen, apart from being a cleric, was also a writer, a public figure and originator of the political movement Hizmet, which had many supporters in Turkey. People were attracted to the idea of developing education and intercultural dialogue.

In addition, Gülen’s movement was actively supported by Erdogan, when he held the post of Prime Minister of Turkey and his Justice and Development Party, which played a significant role in the elections.

In spite of this, Gülen was increasingly becoming critical of the Turkish government. In 1999, he left for treatment to the United States and no longer returned to his homeland, after which his relations with the authorities of Turkey deteriorated sharply.

In 2013, Gülen strongly criticized the harsh dispersal of police by protesters who were gathered campaigning against sealing off Istanbul's Gezi Park. Due to the law enforcement action of that day, several people were killed and rallies grew into mass demonstrations.

Erdogan then blamed the supporters of Gülen’s party Hizmet, saying that it was his people who were protesting in the park. Later on, a corruption scandal broke out in Turkey where dozens of high-ranking officials were arrested.

42 Helicopters Missing in Turkey Sparking Concerns of a Second Coup Attempt
Erdogan described it as an attempt to shift power under the pretext of a fight against corruption and accused the Hizmet movement.

The conflict between the parties kept amplifying. In 2014, Turkish police arrested employees of one of Turkey's largest newspapers Zaman and broadcaster Samanyolu TV, allegedly for having close ties with the Hizmet movement.

They were accused of trying to create an illegal organization and attempting to seize power in the country. In 2016, police detained more than a hundred supporters of Gülen, whereas, Zaman was given control of the external administration.

In May of this year, Erdogan actually said that Hizmet will be likened to a terrorist organization.

Gülen himself has firmly condemned the coup attempt, which occurred on the night of July 16. He did not rule out that it is possible that the coup attempt was staged by the Turkish leader himself.

“I do not think that the world believes in the charges made by President Erdogan. There is a chance that it was a staged coup, which could be used for further accusations against Gülenists,” the politician said.

Late on Friday, Turkish authorities said that an attempted coup is taking place in the country. Turkish President Recep Tayyip Erdogan urged Turkish citizens to take to the streets, stating that the coup attempt was carried out by a small group within the military.

The coup attempt was suppressed by early Saturday, with Turkish Prime Minister, Binali Yildirim, stating that all of the coup supporters have been detained and the country is returning to normal life.

Over 260 people were killed and hundreds were injured during the events, while some 6,000 people have already been detained.