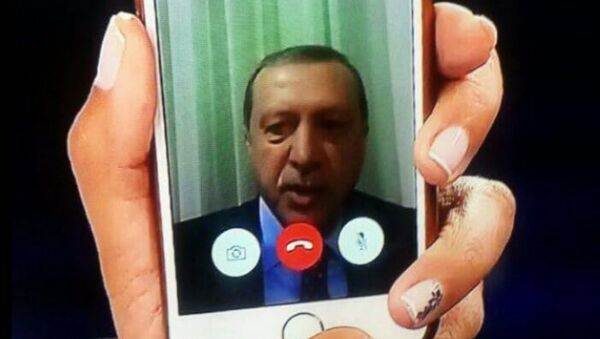 Pepe Escobar
All materials
When Turkish President/aspiring Sultan Recep Tayyip Erdogan landed at Istanbul’s Ataturk airport early Saturday morning, he declared the attempted coup against his government a failure, and a “gift from God.”

Erdogan Blames Gulenist Network, Calls on Public to Fight in Public Squares
God apparently uses Face Time. It was via that iconic iPhone footage from an undisclosed location shown live on CNN Turk by a bewildered female anchor that Erdogan managed to call his legion of followers to hit the streets, unleash People Power and defeat the military faction that had taken over state TV and proclaimed to be in charge.

So God does work in mysterious mobile ways. Erdogan’s call was heeded even by young Turks who had fiercely protested against him in Gezi Park; were tear-gassed or water-cannoned by his police; think the AKP governing party is disgusting; but would support them against a “fascist military coup.” Not to mention that virtually every mosque across Turkey relayed Erdogan’s call.

Ankara’s official version is that the coup was perpetrated by a small military faction remote-controlled by exiled-in-Pennsylvania cleric Fethullah Gulen, himself a CIA asset. As much as responsibility remains debatable, what’s clear is the coup was a Turk remix of The Three Stooges; the actual stooges in fact may have been the already detained 2nd Army Commander Gen. Adem Huduti; 3rd Army Commander Erdal Ozturk; and former Chief of Air Staff Akin Ozturk.

As over-excited former CIA ops were blaring on US networks – and they do know a thing or two about regime change — rule number one in a coup is to aim at, and isolate, the head of the snake. Yet the wily Turkish snake, in this case, was nowhere to be seen. Not to mention that no top generals sounding convincingly patriotic went on the TRT state network to fully explain the reasons for the coup.

(Erdogan) love is in the air

Turkish Public Broadcaster Under Heavy Gunfire From Helicopters
The coup plotters did aim at the intel services – whose top positions are at Istanbul’s airport, the presidential palace in Ankara and near the ministries. They used Cobra helicopters – with pilots trained in the US – against these targets. They also aimed at the army’s high command – which for the past 8 years is designated by Erdogan and is not trusted by many a mid-ranking officer.

As they occupied the Bosphorus bridges in Istanbul they seemed to be in touch with military police – which is spread out all over Turkey and have a solid esprit de corps. But in the end they did not have the numbers – and the necessary preparation. All key ministries seemed to be communicating among themselves as the plot developed, as well as the intel services. And as far as Turkish police as a whole is concerned, they are now a sort of AKP pretorian guard.

Meanwhile, Erdogan’s Gulfstream 4, flight number TK8456, took off from Bodrum’s airport at 1:43 A.M. and flew for hours over Turkey’s northwest with its transponder on, undisturbed. It was from the presidential plane, while still landed, that Erdogan had gone on Face Time, and then, on the air, managed to control the countercoup. The plane never left Turkish airspace – and was totally visible to civil and military radars. The coup plotters’ F-16s could have easily tracked and/or incinerated it. Instead they sent military choppers to bomb the presidential abode in Bodrum a long time after he had left the building.

The head of the snake must have been 100% sure that to board his plane and stay on Turkish airspace was as safe as eating a baklava. What’s even more startling is that the Gulfstream managed to land in Istanbul in absolute safety in the early hours of Saturday morning – despite the prevailing notion that the airport was occupied by the “rebels”.

Turkey Detains Several Incirlik Air Base Servicemen on Coup Attempt Links
In Ankara, the “rebels” used a mechanized division and two commandos. Around Istanbul there was a whole army; the 3rd command is actually integrated with NATO’s rapid reaction forces. They supplied the Leopards positioned in Istanbul’s key spots – which by the way did not open fire.

And yet the two key armies positioned in the Syrian and Iranian borders remained on “wait and see” mode. And then, at 2 A.M., the command of the also key 7th army based in Diyarbakir – in charge of fighting the PKK guerrillas – proclaimed his loyalty to Erdogan. That was the exact, crucial moment when Prime Minister Binali Yildırım announced a no-fly zone over Ankara.

That meant Erdogan controlled the skies. And the game was over. History does move in mysterious ways; the no-fly zone dreamed by Erdogan for so long over Aleppo or the Syrian-Turkish border in the end materialized over his own capital.

Round up the usual suspects

The US position was extremely ambiguous from the start. As the coup took over, the American embassy in Turkey called it "Turkish uprising". Secretary of State John Kerry, in Moscow to discuss Syria, also hedged his bets. NATO was royally mute. Only when it became clear the coup was in fact smashed President Obama and the “NATO allies” officially proclaimed their “support for the democratically elected government”.

The Sultan went back to the game with a vengeance. He immediately went live on CNN Turk demanding Washington hands over Gulen even without any evidence he masterminded the coup. And that came with an inbuilt threat; “If you want to keep access to Incirlik air base you will have to give me Gulen”. It’s hard not to be reminded of recent history – when the Cheney regime in 2001 demanded the Taliban hand Osama bin Laden over to the US without offering proof he was responsible for 9/11.

Kerry Blasts Turkey for Insinuating that Washington Plotted Coup of Erdogan
So the number one eyebrow-raising possibility is a go; Erdogan’s intel services knew a coup was brewing; and the wily Sultan let it happen knowing it would fail as the plotters had very limited support. He also arguably knew – in advance — even the pro-Kurdish Peoples’ Democratic Party (HDP), whose members Erdogan is trying to expel from parliament, would support the government in the name of democracy.

Two extra facts add to the credibility of this hypothesis. Earlier last week Erdogan signed a bill giving soldiers immunity from prosecution while taking part in domestic security ops – as in anti-PKK; that spells out improved relations between the AKP government and the army. And then Turkey’s top judicial body HSYK laid off no less than 2,745 judges after an extraordinary meeting post-coup. This can only mean the list was more than ready in advance.

The major, immediate post-coup geopolitical consequence is that Erdogan now seems to have miraculously reconquered his “strategic depth” – as former, sidelined Prime Minister Davutoglu would have it. Not only externally – after the miserable collapse of both his Middle East and Kurdish “policies” – but also internally. For all practical purposes Erdogan now controls the Executive, the Legislative and the Judiciary – and is taking no prisoners to purge the military for good. Ladies and gentlemen, the Sultan is in da house.

This means the neo-Ottoman project is still on – but now under massive tactical reorientation. The real “enemy” now is Syrian Kurds – not Russia and Israel (and not ISIS/ISIL/Daesh; but they never were in the first place). Erdogan is going after the YPG, which for him is a mere extension of the PKK. His order of the day is to prevent by all means an autonomous state entity in northeast Syria – a "Kurdistan" set up like a second Israel supported by the US. For that he needs some sort of entente cordiale with Damascus – as in insisting that Syria must preserve its territorial integrity. And that also means, of course, renewed dialogue with Russia.

So what's the CIA been up to?

Needless to add Ankara and Washington are now on a certified collision course. If there is an Empire of Chaos hidden hand in the coup – no smoking gun yet — that certainly comes from the Beltway neocon/CIA axis, not the lame duck Obama administration. For the moment Erdogan’s leverage only amounts to access to Incirlik. But his paranoia is ballooning; for him Washington is doubly suspicious because they harbor Gulen and support the YPG.

Turkey Normalizing Ties With Russia, Israel to Benefit Entire Region - FM
Hell hath no fury as an underestimated Sultan as well. For all his recent geopolitical follies, Erdogan’s simultaneous ballet of reconnecting with Israel and Russia is eminently pragmatic. He knows he needs Russia for the Turkish Stream and to build nuclear plants;  and he needs Israeli gas to consolidate Turkey’s role as a key East-West energy crossroads.

When we learn, crucially, that Iran supported Turkey's "brave defense of democracy", as tweeted by Foreign Minister Zarif, it’s clear how Erdogan, in a mater of only a few weeks, reconfigured the whole regional picture. And that spells out Eurasia integration and Turkey deeply connected to the New Silk Roads – not NATO. No wonder the Beltway – for whom, overwhelmingly, Erdogan is the proverbial “erratic and unreliable ally” — is freaking out. That dream of Turkish colonels under direct CIA orders is over – at least for the foreseeable future.

So what about Europe? Yildirim already said that Turkey might reinstate the death penalty – to be applied to the coup plotters. This means, in essence, bye bye EU. And bye bye to the European Parliament approving visa-free travel for Turks visiting Europe. Erdogan after all already got what he wanted from chancellor Merkel; those 6 billion euros to contain the refugee crisis that he essentially unleashed. Merkel bet the farm on Erdogan. Now she’s talking to herself – while the Sultan is able to dial God on Face Time.