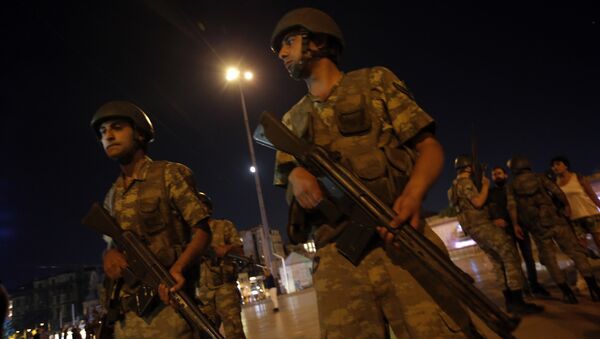 An arrest warrant has been issued for the high-ranking official.

Col. Ali Yazici is now expected to be placed into custody over alleged involvement in Friday's coup attempt. The Turkish media did not specify what role the colonel played in the attempted coup.

What’s Behind Turkish Officers’ Attempt to Stage a Coup
On Saturday, commander of Turkey's western Balikesir airbase Brig. Gen. Ishak Dayioglu was detained on coup attempt links. Moreover, Akin Ozturk, who is an alleged leader of the military coup attempt in Turkey and the former commander of the country's air force, was also detained in Turkey.

The coup attempt was suppressed by early Saturday, with Turkish Prime Minister Binali Yildirim stating that all coup supporters have been detained and the country is returning to normal life. Over 260 people were killed and hundreds were injured during the events, while some 6,000 people have already been detained.