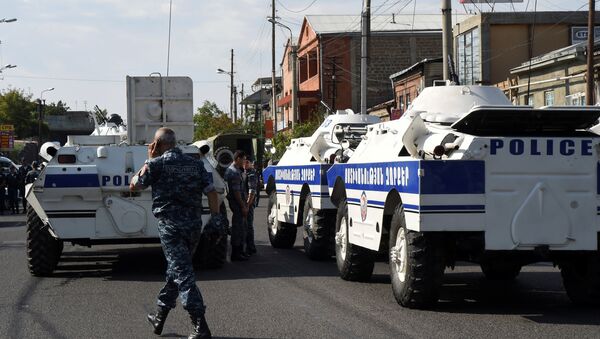 © REUTERS / Melik Baghdasaryan/Photolure
Subscribe
Armenian President Serzh Sargsyan held a meeting on Sunday with the heads of law enforcement agencies amid the hostage situation in the country's capital, the press service of the Armenian leader said.

YEREVAN (Sputnik) — Earlier in the day, an armed group took six police officers hostage at a patrol police station in the capital's district of Erebuni, killing one officer and injuring three. The hostage takers are demanding the release of Jirair Sefilian, an opposition politician and the founder of the New Armenia Public Salvation Front. Sefilian, who took part in the 1988-1994 Nagorno-Karabakh conflict with Azerbaijan, is accused of the illegal acquisition and possession of arms.

"The meeting participants reported to the President about the situation following an armed incident that took place this morning, and on the details of measures taken by the law enforcement agencies," the press service said in a statement.

The press service added that "law enforcement officials are fully in control of the situation and are taking all the necessary measures to reach the solution."

"They have six hostages, all of them are the members of the police. They [members of the group] are armed, and we have once again called on them to refrain from any provocations, crimes, murder and bloodshed," deputy chief of the Armenian Police Hunan Poghosyan told reporters.

Armed Men Take Hostages in Police Station in Armenia's Yerevan
He added that the hostage takers' demands have not change — they are demanding the release of Jirair Sefilian, an opposition politician and the founder of the New Armenia Public Salvation Front. Sefilian, who took part in the 1988-1994 Nagorno-Karabakh conflict with Azerbaijan, is accused of the illegal acquisition and possession of arms. According to Poghosyan, the police have refused to answer the demand.

Earlier, Armenian member of parliament Nikol Pashinyan told local media that seven police officers remained in the police building after one was allowed to leave due to health problems. The hostage takers told Pashinyan that they also demand the resignation of the country's president Serzh Sargsyan.