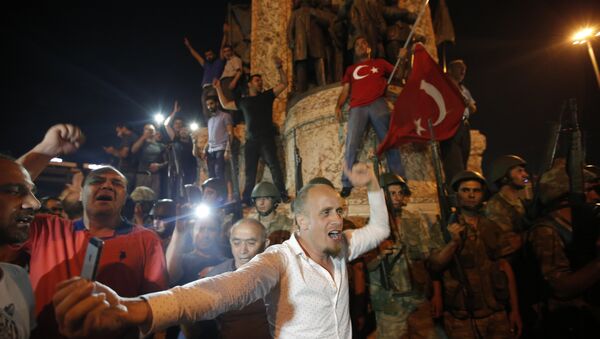 On Friday, the Turkish government came under siege by a faction of military forces who sought to end the rule of President Recep Tayyip.

However, President Recep Tayyip Erdogan has maintained his hold on power while the military coup attempt left at least 90 people dead.

How Will Failed Coup in Turkey Affect US, Russia's Anti-Daesh Fight?
European Council President Donald Tusk said that the consequences of the attempted coup in Turkey will be crucial for the whole region and Turkey's relations with the EU.

Moreover, Tusk and head of the European Commission Jean-Claude Juncker have supported Turkish President Recep Tayyip Erdogan's government and urged a normalization of the situation in the country.

"Military coups have no place in modern Turkey. There is no alternative to democracy and the rule of law," Tusk said at a press conference during an Asia-Europe summit in Mongolia.

The Russian Foreign Ministry also expressed concerns over the attempted military coup in Turkey and called on the authorities and the people of Turkey to resolve conflicts without the use of force. A corresponding statement was released on the official website of the Ministry.

"We call on the government and people of Turkey to solve the existing problems without violence, to respect the constitutional order," the statement said.

US May Pressure Turkey Against Thaw With Russia After Failed Coup
At the same time, Russian Foreign Ministry spokeswoman Maria Zakharova posted on her Facebook page a comment on behalf of Minister Sergei Lavrov.

"Lavrov has recommended Russians located in Turkey not to leave their homes," the post said. "I might add: those who were planning a trip to Turkey should weigh all the risks! Especially when it comes to traveling with children," Zakharova wrote.

US President Barack Obama and US Secretary of State John Kerry also strongly condemned the attempted coup and urged all parties to "support the democratically elected government of Turkey".

"The president and secretary agreed that all parties in Turkey should support the democratically-elected government of Turkey, show restraint, and avoid any violence or bloodshed. The secretary underscored that the State Department will continue to focus on the safety and security of US citizens in Turkey," the White House statement said.

Iran's Foreign Minister, Javad Zarif, expressed his concerns about the situation in the country on Twitter:

"Deeply concerned about the crisis in Turkey. Stability, democracy & safety of Turkish people are paramount. Unity & prudence are imperative."

For its turn, the Foreign Ministry of India also said in its statement that it was closely monitoring the situation in Turkey.

"India calls upon all sides to support democracy and mandate of the ballot and avoid bloodshed," the ministry said in a statement, cited by Al Jazeera.