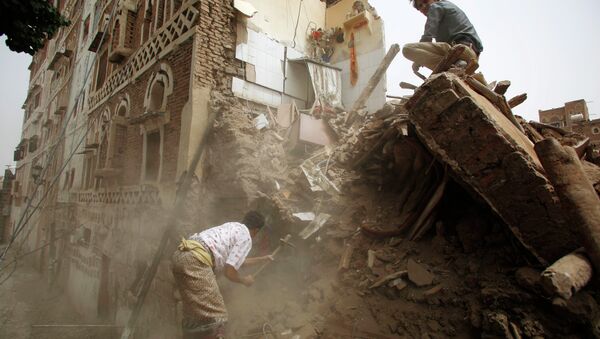 London may help Riyadh return to the UN Human Rights Council despite a troubling United Nations report linking the Saudi regime to hospital and schoolhouse bombings in Yemen.

The UK is likely to back Saudi Arabia’s re-appointment as a member of UN Human Rights Council, despite international outcry over Riyadh’s practice of beheading its citizens as a punishment for crimes and its bloody military operation in Yemen.

Yemeni Houthi Rebels Attack Saudi Arabian Base With Ballistic Missile
Saudi Arabia, a country notorious for its draconian laws and neglect of basic human rights, became a member of the panel in 2013 amid harsh backlash from international community. Since then Riyadh has interfered in the simmering civil war in neighboring Yemen, conducting military operations that claimed thousands of civilians’ lives.

"The Saudi-led coalition has launched scores of airstrikes which appear to have deliberately targeted civilians, including hospitals, schools, markets, mosques, and so on. They also have used internationally banned cluster munitions," Richard Bennett, the head of Amnesty International's UN office, told Radio Sputnik.

On Thursday, UN Secretary-General Ban Ki-moon requested that Saudi Arabia provide proof on the “concrete actions” they have taken to prevent minor’s deaths in Yemen.

Riyadh Labels Reports on Clashes in Yemen Near Saudi Border 'Inaccurate'
According to Children and Armed Conflict (CAAC) annual report, some 60% of children deaths in Yemen in 2015 were caused by Saudi-led coalition’s air attacks.

However, that data hasn’t resulted in any particular steps to sanction Riyadh’s actions. Saudi Arabia had been placed in the UN blacklist for killing children in the beginning of June, but shortly after was removed from the list under suspicious circumstances with later reports revealing that the Saudi Foreign Minister Adel al-Jubeir threatened to cut off millions in funding from United Nations programs and to urge regional partners to respond in kind.

“Blatant pandering such as this undermines all of the UN’s work to protect children caught up in war,” Bennett said of the organization’s stance of Riyadh’s actions.

Britain is alleged to have been engaged in a controversial vote-trading deal to ensure Saudi Arabia’s participation in the council three years ago and seems to be ready to back its ally one more time, no matter what reports on human rights violation say.

Asked earlier this month if London would vote for Riyadh to remain in the Council, Foreign Office minister Joyce Anelay evaded an answer: “The UK never publicizes how it votes in these matters. Saudi Arabia did not need our support in the last election to the Human Rights Council since they were uncontested.”

The fact that Riyadh enjoys unconditional support from the UN and the UK is based on economic considerations.

London seems to be ready to turn a blind eye on horrifying human rights abuses – that under some estimates escalate to the level of war crimes – in exchange for arms deliveries to the country.

During first three months of Saudi-led bombings of Yemen, the UK increased its supplies to the country 100 times, the Independent reported. The revenues for Britain in this period jumped from1 billion pounds to 9 billion.

Groups Urge UN to Oust Saudi ‘Child Killers’ From Human Rights Council
The UN in turn, has to bear with Riyadh’s atrocities, as the Gulf Kingdom provides the organization with the lion’s share of its funding.

Meanwhile, Saudi Arabia continues its air raids in Yemen, in blatant violation of the ceasefire, that have destroyed civilian infrastructure and residential buildings while killing and maiming scores of civilians.