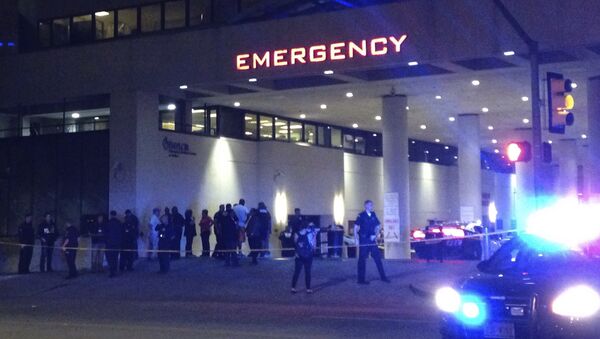 © AP Photo / Emily Schmall
Subscribe
Shortly after the warning four cops in Baltimore were ambushed by a lone gunmen using an assault rifle equipped with armor piercing rounds before police were able to fatally shoot down the attacker.

The FBI issued a "credible threat" warning to law enforcement agencies throughout South Florida and in Baltimore, Maryland on Friday.

In a brief, one paragraph statement, FBI Special Agent Michael Leverock said his agency offered a "safety bulletin" regarding the threat to police departments, but declined to offer further information.

The threat, according to Miami Herald sources, was directed at police and comes in the wake of last week’s social media threats of a "police purge" to "kill all police" issued in cities throughout the country.

In Baltimore, the FBI warned that members of the Black Guerrilla Family gang had plotted to ambush officers before a deadly police involved shooting in West Baltimore when four officers came under fire from a 33-year-old man with a self-assembled, high-powered long gun. The police returned fire fatally wounding the suspect, but no officers were injured in the ambush.

"We’re lucky we don’t have four dead cops today," said Baltimore Police spokesperson TJ Smith. "If this was a successful ambush, then we would have had to plan right now for four funerals."

The gunman, identified as Dayten Ernest Harper, was armed with an AR-15 style assault rifle with armor-piercing rounds according to Baltimore's WJZ News.

The incident follows the deadly police shooting of Alton Sterling in Baton Rouge, Louisiana and Philando Castile in Falcon Heights, Minnesota spurring nationwide outrage as people looked on in horror as the unjustified killings were videotaped – including a Livestream by Philando Castile’s girlfriend who watched narrated the video as her boyfriend bled out from three gun shots to his chest.

Protests ensued in the wake of the killings led by predominantly by Black Lives Matter, but a peaceful demonstration in Dallas turned tragic when a gunmen took aim at police officers killing five and wounding a dozen others in the deadliest strike against cops nationwide since 9/11.

The shooter told police that he was out to kill cops to avenge the deaths of innocent black men across the country who had been wrongfully slain at the hands of aggressive, sometimes racist, cops.

There have been a spate of other incidents where police officers have been ambushed across the country since Dallas with a call to arms made via social media to "kill all police" as part of a "police purge" leading to an FBI Situational Information Report (SIR) warning. The already tense situation between cops and protesters has gotten worse in recent days with a group identifying itself as the New Black Panther Party defiantly carrying long-guns and weapons at the front of protest lines in states where open carry is permitted.