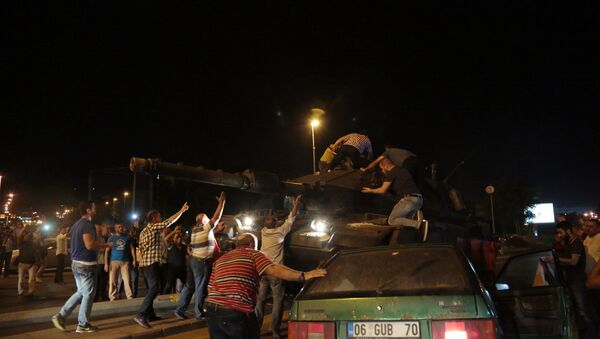 © AP Photo / Burhan Ozbilici
Subscribe
What began as a brainstorm erupted into a full blown conspiracy theory when a Politico reporter poured gas on the fire claiming that his Turkish source believed the coup was a staged performance.

Social media is abuzz with new claims that Turkey’s President Recep Tayyip Erdogan faked the coup attempt against the government after the country’s leader called the botched overthrow “a gift from Allah.” Posting under #TheaterNotCoup social media users ask aloud whether the whole think was an elaborate scheme for the Turkish strongman to garner even more control.

​The theory originated when Politico’s European correspondent Ryan Heath said that a Turkish source of his believed that the entire debacle was a staged performance citing the fact that the government was able to communicate with everybody in Turkey via SMS text message and that Erdogan would be able to "clean" the military of secularists and install hardline Islamists in both the judiciary and the armed forces stripping away any constitutional check on the leader.

​The social media punditry, scoffed at as conspiracy theorists and crazies by most, argue that the hyperbolic Erdogan will use the coup attempt that left at least 265 dead and over 2000 wounded in the same fashion that Hitler used the Reichstag fire – the 1933 arson attack on the German parliament building which Hitler used as an excuse to suspend civil liberties and order mass arrests.

​There are many reasons to doubt this fanciful theory not the least that President Erdogan was on vacation when the coup plotters first seized the TRT news channel, the bridges, and Istanbul’s Ataturk International Airport. The leader was forced to phone in by FaceTime to CNN Turk to put out a desperate plea to the people of Turkey to take to the streets and put down the coup.

​Others point to the convenience for Erdogan who was able to blame his arch nemesis Fethullah Gulen who alleged has developed a shadow government within Turkey – known as the Parallel Structure – with ambitions of ultimately seizing control of the country.

Furthermore, Erdogan had fallen out of favor among Western leaders in recent months after repeated crackdowns on journalists, legal maneuvering to outlaw dissenters, forging a constitutional amendment revoking legislative immunity for opposition lawmakers, and seizure of nearly full control of the country’s executive and legislative powers with the tacit consent of Prime Minister Binali Yildirim.

​President Erdogan has been both a tormenter of Europe and the United States as well as a key linchpin in the strategic plans of both. Turkey agreed to take in an additional 1 million Syrian refugees from the European Union after already housing over 2.75 million migrants from the war-torn country, in return for fast-track consideration within the EU and visa-free travel.

Those plans were summarily shot down by European leaders with former British Prime Minister David Cameron saying that he didn’t fancy Turkey would be prepared to enter the EU for another thousand years at least citing the country’s move towards an autocratic framework.

​Nonetheless, Turkey’s President was emboldened following the events that unfolded on Friday with the very future of Europe hanging in the balance with the EU all but praying that Erdogan would hold on. If Erdogan’s regime fell, Europe faced the specter of several million additional refugees flooding into the continent – a reality that would all  but mark the end of the economic union and result in a near immediate end to the Schengen open borders agreement.

The United States found itself in a similar predicament with Turkey serving as NATO’s primary launchpad into the Middle East to attend to the crises in Syria and Iraq. If Turkey fell and the United States lost access to the Incirlik air base the US fight against Daesh would could to a screaming halt.

Faced with those realities, the preview of what a world without Erdogan would look like may very well have been a godsend for the besieged leader of Turkey, but it may also be a nightmare for the United States.

Turkey’s government has already wrangled together over 2,800 soldiers and 2,745 judges who are claimed to have conspired against the Erdogan regime and who now all face treason charges. It is unknown whether any of these targeted soldiers or jurists were opponents to Erdogan’s strongman form of government, but ultimately not involved in the plot at all. Regardless, the prison doors have now shut on the leaders primary political opponents.

"This means it [the failed coup] will be followed by a real coup by Erdogan himself, and the last remnants of democracy will be lost," suggested one social media pundit.

The alleged mastermind of the coup according to Turkish officials, Fethullah Gulen, also trafficked the idea that the coup was staged saying "I don’t believe that the world believes the accusations made by President Erdoğan. There is a possibility that it could be a staged coup and it could be meant for further accusations [against the Gülenists]."

Whether the coup was ultimately fact or fiction, the world has been fundamentally changed by the horror descended on the streets of Istanbul and Ankara on Friday with the advantage clearly going to the coup’s survivor.

000000
Popular comments
It doe look like Erdos own planned coup, especially after watching the military take attarturk airport and then disappear later and it was several hours later that Erdo came on the phone .
raptorabz
17 July 2016, 00:01 GMT8
000000
Hermes, Yes. It's an interesting topic. I t kind of coincided with some US Congress lashing out at the Saudis about 911. I was listening to neocon AM radio yesterday and they're all excited about killing more people. The moron said we need to do more now (kill now) so we could do less later. Buck Sexton for necon of the month. He's never been in uniform and won't even risk going to the RNC convention, but he's find with voting for others to get hurt and die, as long as it's not him. The other thing with that guy was he had a laughing fit. I mean to be at that level of listener volume and choke with the giggles is embarrassing.
jas
17 July 2016, 00:56 GMT
000000
Newsfeed
0
New firstOld first
loader
LIVE
Заголовок открываемого материала
Access to the chat has been blocked for violating the rules . You will be able to participate again through:∞. If you do not agree with the blocking, please use the feedback form
The discussion is closed. You can participate in the discussion within 24 hours after the publication of the article.
To participate in the discussion
log in or register
loader
Chats
Заголовок открываемого материала
Worldwide
InternationalEnglishEnglishMundoEspañolSpanish
Europe
DeutschlandDeutschGermanFranceFrançaisFrenchΕλλάδαΕλληνικάGreekItaliaItalianoItalianČeská republikaČeštinaCzechPolskaPolskiPolishСрбиjаСрпскиSerbianLatvijaLatviešuLatvianLietuvaLietuviųLithuanianMoldovaMoldoveneascăMoldavianБеларусьБеларускiBelarusian
Transcaucasia
ԱրմենիաՀայերենArmenianАҧсныАҧсышәалаAbkhazХуссар ИрыстонИронауОssetianსაქართველოქართულიGeorgianAzərbaycanАzərbaycancaAzerbaijani
Middle East
Sputnik عربيArabicArabicTürkiyeTürkçeTurkishSputnik ایرانPersianPersianSputnik افغانستانDariDari
Central Asia
ҚазақстанҚазақ тіліKazakhКыргызстанКыргызчаKyrgyzOʻzbekistonЎзбекчаUzbekТоҷикистонТоҷикӣTajik
East & Southeast Asia
Việt NamTiếng ViệtVietnamese日本日本語Japanese中国中文Chinese
South America
BrasilPortuguêsPortuguese
NewsfeedBreaking
01:06 GMTMusk Tells SpaceX Team Company Is on Verge of Bankruptcy Amid Troubled Engine Production - Report
01:02 GMTLeftist Castro’s Victory in Honduras Vote Spells End of US-Backed ‘Narco-Politics, Neoliberalism’
00:04 GMTPentagon Withholding Pay to National Guardsmen Refusing COVID-19 Vaccine
YesterdayNorth Korea Decries AUKUS For Being US 'Tool’ That Threatens Nuclear War - Report
YesterdayCNN Host Chris Cuomo 'Suspended Indefinitely' Over Coverage of Accusations Against Brother Andrew
YesterdayJudge Halts Biden's Vaccine Mandate for Healthcare Workers Nationwide
YesterdayBradley Cooper Says He Could've Been Stabbed on NYC Subway While Picking Daughter Up From School
YesterdayBest Way to Fight Inflation Is by Killing Democrats' Massive Social Spending Bill, McConnell Says
YesterdayMoscow Ranks First Among Top 3 Cities in Terms of Innovations Against COVID-19
YesterdayJosephine Baker Becomes First Black Woman Honored at Pantheon in Paris
Yesterday‘Difficult’ to Tell if Omicron Coronavirus Variant More Transmissible Than Delta, Fauci Says
YesterdayUS Senators Urge Biden Administration to Toughen Response to Incidents in Space
YesterdayPandemic Pushes Hunger in Latin America, Caribbean to 15-Year High, UN Says
YesterdayWashington Sanctions Nine Cuban Officials for ‘Attempts to Silence’ US-Backed November 15 Protests
YesterdayQueen Elizabeth Hasn't Given up on Fine Wine Despite Alleged Health Concerns - Report
YesterdayKentucky Journalist Elle Smith Wins Miss USA 2021 Pageant
YesterdayTwitter Bans Unconsented Sharing of Photos, Videos
YesterdayUS Stock Indices Down Almost 2% After Powell Says Faster Stimulus Tapering Possible
YesterdayMyanmar's Prosecution to Bring New Charge Against Aung San Suu Kyi - Reports
YesterdayWife of Mexican Drug Kingpin 'El Chapo' Sentenced to 3 Years in Prison