Point of No Return: Western Leaders Should Bear Responsibility for Nice 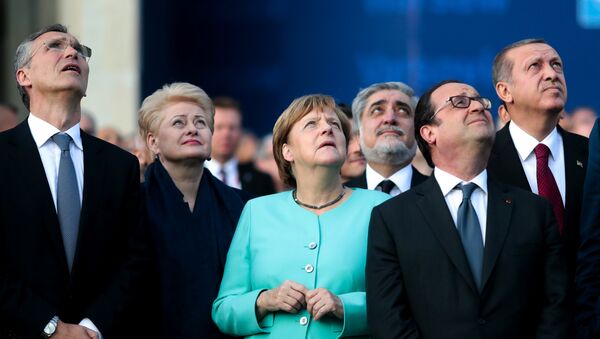 John Wight
All materials
The terrorist massacre of more civilians in France once again reminds us of the rank idiocy of NATO's saber rattling in Eastern Europe against a people and government doing more to confront terrorism than any other.

The people of France are today dealing with the aftermath of another act of indescribable and indiscriminate violence, this time committed by a crazed assailant in a heavy goods truck plowing into crowds enjoying the country's annual Bastille Day celebrations in Nice. 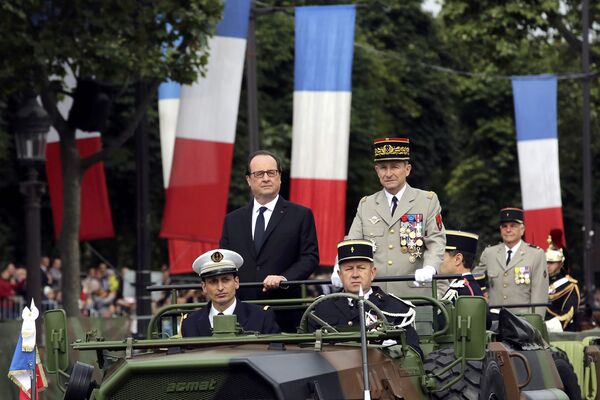 President Hollande made his customary speech denouncing the attack, assuring the French people that security is being stepped up and that everyone involved will be brought to justice.

'Mass Panic Like I'd Never Seen': Nice Terror Attack Footage
Obama also made his customary speech, speaking words of sympathy and solidarity with France and its people, denouncing yet another terrorist attack against innocent civilians. In this they were joined by messages of support from Britain's David Cameron, Angela Merkel and other Western leaders in a ritual of sympathy that automatically follows the ritual slaughter of the innocents we have become all too accustomed to.

However, we are past the point when words are enough. On the contrary, the aforementioned leaders must bear their share of responsibility when we consider that despite words of sympathy for the victims and condemnation of the perpetrators, not everything that should be done, can be done and must be done to counter this threat — is in fact being done. 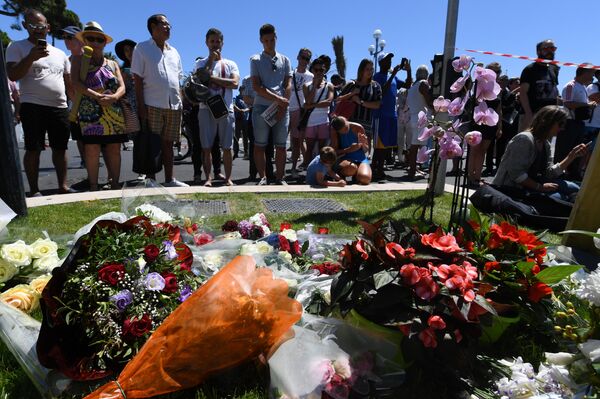 People stand on July 15, 2016 in front of flowers and candles placed near the site in Nice where a gunman smashed a truck into a crowd of revellers celebrating Bastille Day, killing at least 84 people.
© AFP 2021 / BORIS HORVAT

To put it another way, why at the recent NATO summit in Warsaw was Russia at the top of the agenda rather than Daesh?

Why is Russia deemed more of a threat to the West than Daesh? Why do we have a situation where Russian aircraft and personnel are risking and sacrificing their lives fighting Daesh in Syria, while NATO aircraft and personnel are conducting military exercises on Russia's border? Why when Russian missiles are striking terrorist targets in Syria has a missile defense system just been deployed in Romania, directly threatening Russia's security?

These are questions that the citizens of France, Germany, the UK and the United States should be demanding answers to from their leaders as they grapple with the scale of the human carnage in Nice. 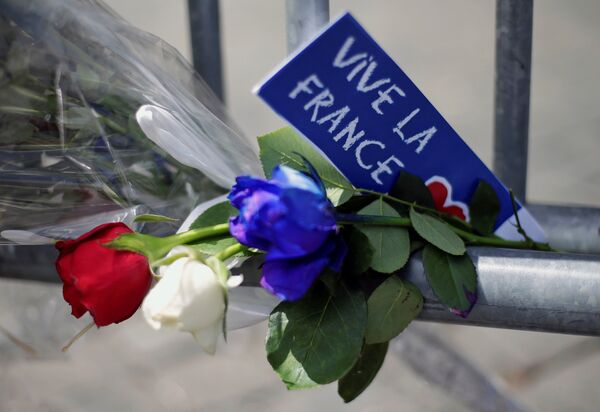 Flowers are seen attached to a fence to remember the victims of the Bastille Day truck attack in Nice in front of the French embassy in Rome.
© REUTERS / Max Rossi
And when they do — they will inevitably arrive at the conclusion that the huge effort and industry that those leaders have expended in demonizing Russia, depicting it as a country intent on European, even global conquest, is driven not by reality but by an ideological framework that has no place in the 21st century.

The actions of hawks in Washington in using its allies and proxies to help foment instability and intensify tensions with Moscow, which if allowed to continue risks a major military confrontation, is not only misjudged it is reckless in the extreme. This recklessness is compounded by the fact that the source of the problem lies not with Russia or its foreign policy, as is claimed, but with America's refusal to accept that Russia and its people refuse to accept their place as Carthage in relation to Washington's self-proclaimed status as Rome.

The implementation of economic sanctions, the deployment of troops, aircraft and naval forces deployed close to Russia's borders and territory, all at the same time as Daesh unleashes terror on the citizens of the states involved — these are the actions of a child poking the dog guarding the house with a stick, forcing the dog to defend itself while intruders are gaining entry to the house in the back.

Let us not mince words. The West has singularly failed to confront Daesh and other terror groups in the Middle East over the past two years during which this menace has emerged. Instead it has actively sought to undermine and weaken those who have and are confronting said groups — namely Russia, Syria, Iran, and their allies.

The verities of the Cold War, buttressed by an imperialist worldview and the arrogance of unfettered power and domination, has exposed Washington and its proxies as a bloc of nations that speak the language of democracy while dealing in organized hypocrisy.

Indeed, in their vocabulary democracy is a word employed to justify aggression and the subversion of international law and national sovereignty wherever and whenever they deem fit in pursuit of strategic interests.

And what exactly are those strategic interests? The clearest answer to this question comes in the form of the words of George Kennan, the US State Department mandarin credited with devising the policy of containment adopted by the West after the Second World War in relation to the Soviet Union. In a 1948 classified memo, Kennan writes:

"We have about 50 percent of the world's wealth, but only 6.3 percent of its population…Our real task in the coming period is to devise a pattern of relationships which will permit us to maintain this position of disparity…We should cease to talk about vague and…unreal objectives such as human rights, the raising of living standards, and democratization…we are going to have to deal in straight power concepts."

Strip away the propaganda, the embroidery and the rhetoric and the words of truth Kennan wrote in 1948 remain the driver of Western foreign policy today. It's about maintaining the economic benefits and privileges of the 1 percent of the super rich in whose interests this very policy is set and harnessed.

Meanwhile Russian, Syrian, Iraqi, Iranian, Kurdish, and Lebanese airmen, troops, and militia forces are bleeding and dying in a merciless struggle against the forces of hell, which emerged from seeds of chaos and destabilization not only planted by the West but which continue to be watered and nourished by the West.

It is those Russians, Syrians, Iraqis, Iranians, Kurds, and Lebanese who today are standing with the people of Nice and France, not NATO or Western ideologues who adhere to the "straight power concepts" Kennan describes.