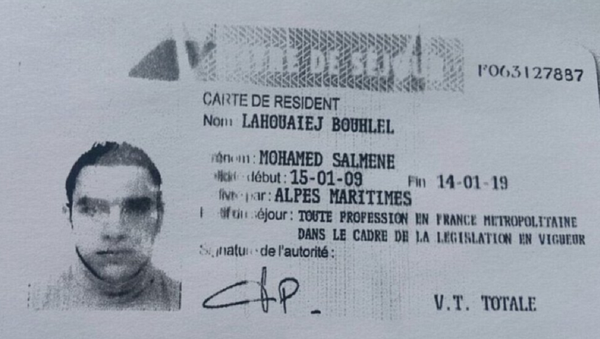 © Photo : Youtube/JPNewsSource
Subscribe
Relatives of a potential perpetrator of a deadly attack in France's Nice are chasing reporters away from their house in the Tunisian town of Msaken, threatening the reporters with bladed weapons, a Sputnik correspondent reported Friday.

Tunisia Investigates Mohamed Bouhlel's Involvement in Nice Attack - Consul
MSAKEN (Sputnik) — The father of the suspect declined to make any comments to reporters, the correspondent added.

Brother of Mohamed Lahouaiej Bouhlel, who is considered to be a perpetrator of a deadly attack in France's Nice, told Sputnik on Friday that his family did not believe media reports and ruled out religious grounds of the attack.

"We are depressed, no one from the family believes media reports. Mohamed couldn't have done it. He has not prayed, he is not religious and has not practiced religious rituals. I do not think that he has committed it on religious or extremist grounds," the brother said.

On Thursday night, a truck plowed into a crowd of people watching fireworks during Bastille Day celebrations in Nice, France, killing at least 84 people and injuring dozens of others, before police killed the driver. Nice resident of Tunisian origin Mohamed Lahouaiej Bouhlel, 31, has been named as a potential perpetrator of the attack.

000000
Popular comments
Dan, yes, they are in mourning, that's why they chasing people with bladed weapons. I can only see violence from their side, why don't you look for a new brain?
kingarko
15 July 2016, 20:56 GMT1
000000
Violence is not the answer, you must be a little muslim boy who defends terrorists. Over 80 people got killed and over 200 hurt and you defending those scumbags, this is sickness.