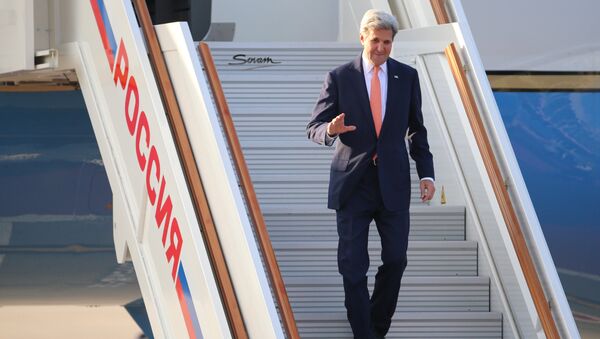 US Secretary of State John Kerry landed in Moscow on Thursday for negotiations on a range of bilateral and international issues with Russian President Vladimir Putin and Foreign Minister Sergei Lavrov.

MOSCOW, July 14 (Sputnik) — According to US State Department spokesman John Kirby, the sides will focus on the Syrian crisis, with Kerry expecting to discuss reduction in violence, as well as the ceasefire regime in the Middle Eastern nation.

The Russian Foreign Ministry, commenting on the forthcoming visit, said that the resolution of the Ukrainian crisis was also a significant issue, as well as other regional topics such as as the Nagorno-Karabakh settlement and the tensions in Afghanistan and on the Korean peninsula.

The ministry expressed hope that Kerry's visit would contribute to improving bilateral relations between Moscow and Washington that are "instrumental in terms of maintaining global stability."