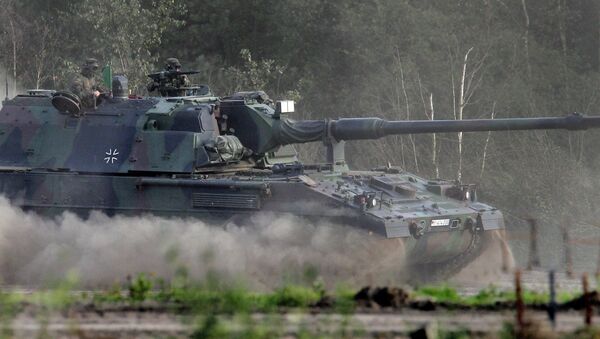 On Wednesday the German cabinet approved Germany's new white paper on security policy and the armed forces, which foresees the country taking on a more active role in European defense.

"Germany’s economic and political weight means that it is our duty to take on responsibility for Europe’s security in association with our European and transatlantic partners in order to defend human rights, freedom, democracy, the rule of law and international law," German Chancellor Angela Merkel wrote in the introduction.

​Joaquin Flores, Editor at Fort Russ and Director and analyst at the Belgrade-based Center for Syncretic Studies, told Radio Sputnik that the document reveals some contradictory trends about the future of European defense, and raises the question of whether Germany will play an increased military role within NATO, or within a new European army.

"The US is not entirely happy about this idea, unless this European army is just a rebranding of NATO and that is not what the people behind this EU army have in mind."

EU Mulls Own Army While Spending Billions on These 7 Defense Organizations
"On the one hand you have this push for NATO to be in more clear control of its member states, that the US will direct the foreign policy of Europe especially with regards to the Middle East, Africa and Eurasia."

"On the other hand, we're going to see this desire among European elites to have their own foreign policy. They may not want to have a confrontation with Russia, they may not want to continue to support Turkey in its efforts against Syria."

The US itself is conflicted about an EU army; on the one hand it knows its military is overstretched by its presence in Europe, but a lesser presence means lesser political influence.

The desire of the German public to take on such a leading role, whether within NATO or a European army, is also questionable.

"The European public and especially German public have been raised from an early age to question militarism and to actually think that Germany is the least responsible in terms of being able to have strong military capacity on the European continent."

Brexit Aftermath: EU's New Strategy 'Paving Way' for United European Army
Other members of the EU are likely to have conflicting views of Germany's increased military presence in Europe, and the possibility of an EU army.

In particular, Flores said that the UK will continue its centuries-old opposition to the idea.

"The historical military rivalry between Germany and France was fueled quite intentionally, quite consciously by England for several centuries."

"This is actually something which is very much connected to the role which the US inherited from England, and still implements."

"We can see more clearly that their role in the EU all along and in NATO has been this transmission belt of American power, to control Europe using these methods."