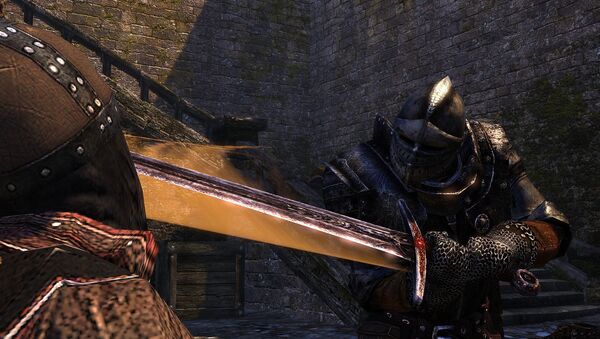 Finian Cunningham
All materials
Washington’s aggression towards Russia is already dangerously detached from reality. But possibly the next vice president in the White House brings an even more alarming element to decision-making – fantasy TV and NATO militarism.

Don't reach for the popcorn and snacks. This is for real folks.

The Truth About Moving in Medieval Knight’s Armor Revealed (VIDEO)
It turns out that Stavridis is a big fan of the hit TV drama, Game of Thrones. Not that there is anything wrong with that entertainment choice per se. Except, that is, when it is used as a policy-making reference material.

Indeed, in a recent opinion article, the retired US Admiral invoked the Medieval sword-wielding fantasy series as inspiration for why the NATO military alliance should be strengthened to fight off alleged Russian aggression.

Seriously, no kidding. American political power has long been suffused with delusional notions of "exceptionalism" and "manifest destiny" as the "leader of the free world". Now, it seems, the next occupants of the White House will be making strategic decisions about war and peace based on emotions derived from a TV drama about feudal intrigue and blood-curdling, warring tribes.

During the past two US administrations under Obama, relations with Russia have rapidly deteriorated, impelled by the fictional theme that Moscow is posing a threat to global security.

This narrative has been amplified to alarming levels during the past two years, to the point where US-led European sanctions are locked on Russia and US-led militarization of Eastern Europe has sharply escalated.

NATO's Double Standards: Why Warsaw Meeting Became a 'Summit of Lies'
The NATO summit in Warsaw earlier this month gives a green light for more troops, missiles, warplanes and tanks to amass on Russia's border for the ostensible purpose of "defending Europe from Russian invasion".

The alleged reasons for such US-led aggression, which European governments have meekly acquiesced to, do not bear objective scrutiny. The Western-backed destabilization of Ukraine in 2014 with a Neo-Nazi coup d'état has been turned on its head and presented as "evidence" of Russia casting a "threat" on the rest of Europe.

Of course, a more plausible explanation is that the contrived conflict between East and West has allowed for the money-spinning expansion of NATO for the Pentagon and its contractors, while also serving as a geopolitical wedge between Russia and Europe to the immense and historically desired advantage of Washington.

The danger of this real-life political intrigue is that the confrontation could careen into an all-out world war involving nuclear weapons.

The reckless American policy is all the more disturbing with Hillary Clinton looking like Obama's successor as president.

Be It Clinton or Trump, Europe Must Get Ready to Arm Itself
Clinton has emerged as the US establishment's candidate-of-choice for the presidency over her Republican rival Donald Trump. Trump is seen as too much of a big-mouth maverick. Wall Street, the Pentagon and the news media outlets — the latter owned by just six conglomerates — don't want him as their point man in the White House.

Clinton's chances of making it to the White House in the forthcoming November elections are given a further boost this week with the endorsement from her erstwhile Democrat rival Bernie Sanders. The "feel the Bern" campaign is burnt out — or maybe that should be "sold out" — and Sanders' endorsement will serve to bring Clinton a lot of the more liberal wing of the Democrats as well as the general voter.

Clinton's presumptive administration is shaping up to be war hawks on steroids. Her Defense Secretary and head of the Pentagon is hotly tipped to be Michele Flournoy. Flournoy, a Pentagon insider who vociferously touts the "Russian aggressor" mantra, has publicly called for a more direct US military intervention in Syria even that means a clash with Russian forces.

Stavridis was the Supreme Commander of the NATO alliance between 2009-2013, at the same time that Hillary Clinton was in office as Secretary of State. It was during Clinton's tenure that Washington adopted an unprecedented hostile policy towards Moscow, setting the stage for the later Ukraine crisis, sanctions and the ongoing NATO militarization of Eastern Europe.

In that policy direction of belligerence towards Russia, Clinton was ably assisted by then NATO military chief, James Stavridis. Both were said to have worked closely in formulating the anti-Russia policy.

With Stavridis called to be vice president under Clinton, the future of US-Russia relations look even more bleak.

Stavridis remains firmly integrated with the American command of NATO. He is apparently a good buddy with the current NATO commander, US Army General Curtis Scaparrotti, whom he chummily refers to as "Scap". On his appointment to the top NATO post earlier in May, Scaparrotti added more invective fuel to the "Russian aggressor" narrative by declaring that the alliance "must be ready fight if deterrence fails".

But it's 61-year-old Stavridis' consulting with TV drama Game of Thrones for his inspiration for NATO military planning that is more perplexing.

NATO, Washington 'Have No Idea' How to Respond to Real Threats
Stavridis describes "the top two challenges facing NATO" as being "the rise of the so-called Islamic State… and the resurgence of a recalcitrant and pugnacious Russia."

In the same article, Clinton's presumed VP choice mentions Game of Thrones three times as providing insights for how NATO should build its forces in order to confront Russia.

"It is a big, ambitious agenda," writes Stavridis. "But compared to what [fictional character] Jon Snow is facing as he opens his eyes and sees the chaotic world in Game of Thrones, there are many sensible strategic and operational options ahead for the [NATO] Alliance."

If Hillary Clinton is elected to the White House — and the US establishment is certainly moving to fix that outcome — her likely ministerial cabinet reads increasingly like a War Cabinet. It is reasonable to caution that tensions between Washington and Moscow could snap into a military confrontation.

2016 Race: Hillary Clinton the Candidate of Neo-Conservative War Hawks
Clinton, Flournoy and Stavridis live in the same delusional echo chamber that repetitively clangs the hollow ring of "Russian aggression". Each will reinforce one another in their collective delusional view of the world and Russia in particular. This belligerent White House mentality will, in turn, reinforce an equally belligerent and delusional NATO command, resulting in a vicious cycle of increasing hostility towards Russia.

And if that fiendish feedback loop is not bad enough, we can throw into the mix that Clinton's top aide in the White House will be a former NATO war-hawk who forms his view of the world from a fantasy TV drama featuring wicked villains.

American politics and its impact on the world is a veritable horror show. And has been for decades. Wars, coups, regime changes, assassinations and enforced poverty of billions of people to gratify a global capitalist elite.

But the ultimate horror episode could be World War III based on the delusional rantings of US political "leaders" who seem to get their understanding of the world from a Medieval soap opera.

The American people need to get organized and switch off this abomination.