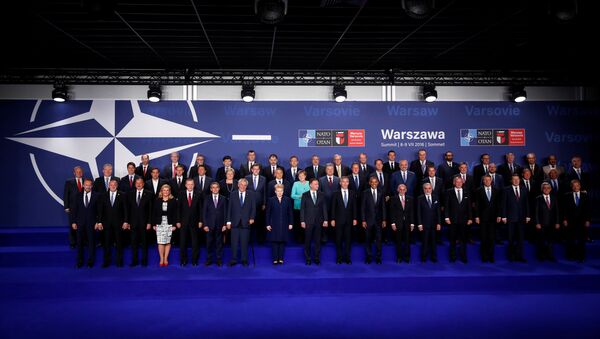 © REUTERS / Jonathan Ernst
Subscribe
The US anticipated some reaction from Russia to NATO’s expanded presence in Europe announced at the summit in Warsaw, according to US Department of Defense Europe and NATO Policy Office Principal Director Rachel Ellehuus.

"I think we always expect a response," Ellehuus said on Wednesday regarding reports from the NATO-Russia Council (NRC) meeting earlier in the day.

Ellehuus noted that the response to the latest developments in NATO is not a surprise, but emphasized that the United States is in favor of "communication" between the military alliance and Russia.

"That is why we supported having the meeting in Brussels", she pointed out.

During the last week’s NATO summit in Warsaw, the alliance agreed to place four combat battalions in Poland, Lithuania, Latvia and Estonia, and further build up its conventional deterrence against Russia.

The Thursday NRC meeting of diplomatic officials is the second such meeting since June 2014, when NATO suspended the Council as well as military cooperation with Russia as a result of the crisis in Ukraine.

000000
Popular comments
Quite interesting to see so many murderers at the same time and one can wonder who is the winner in the killing team of Nato. With these high representatives of their respektive nation, every one of them tops some other in "this team of the smiling destructional forces" whose aim is to be more discusting than the others in order to hold the position of belonging to this "death squad organisation"
ptcjm
15 July 2016, 10:34 GMT
000000
ptcjm, Very well say !!!
tobi.gelando
15 July 2016, 10:45 GMT
000000
Newsfeed
0
New firstOld first
loader
LIVE
Заголовок открываемого материала
Access to the chat has been blocked for violating the rules . You will be able to participate again through:∞. If you do not agree with the blocking, please use the feedback form
The discussion is closed. You can participate in the discussion within 24 hours after the publication of the article.
To participate in the discussion
log in or register
loader
Chats
Заголовок открываемого материала
Worldwide
InternationalEnglishEnglishMundoEspañolSpanish
Europe
DeutschlandDeutschGermanFranceFrançaisFrenchΕλλάδαΕλληνικάGreekItaliaItalianoItalianČeská republikaČeštinaCzechPolskaPolskiPolishСрбиjаСрпскиSerbianLatvijaLatviešuLatvianLietuvaLietuviųLithuanianMoldovaMoldoveneascăMoldavianБеларусьБеларускiBelarusian
Transcaucasia
ԱրմենիաՀայերենArmenianАҧсныАҧсышәалаAbkhazХуссар ИрыстонИронауОssetianსაქართველოქართულიGeorgianAzərbaycanАzərbaycancaAzerbaijani
Middle East
Sputnik عربيArabicArabicTürkiyeTürkçeTurkishSputnik ایرانPersianPersianSputnik افغانستانDariDari
Central Asia
ҚазақстанҚазақ тіліKazakhКыргызстанКыргызчаKyrgyzOʻzbekistonЎзбекчаUzbekТоҷикистонТоҷикӣTajik
East & Southeast Asia
Việt NamTiếng ViệtVietnamese日本日本語Japanese中国中文Chinese
South America
BrasilPortuguêsPortuguese
NewsfeedBreaking
19:00 GMTGerman Court Rules Kohl's Widow Cannot Inherit $1Mln Compensation From Journalist
18:59 GMTShanghai Data Exchange: How China is Set to Outpace US in Data Trade & Technological Competition
18:57 GMTEx-US Capitol Police Officer Appears in Court for January 6 Related Charges - Reports
18:54 GMTFrance to Propose EU-UK Pact on Illegal Migration
18:50 GMTBeijing Has No Plans to Invite to Olympics US Politicians Calling for Boycott, Report Says
18:35 GMTMI5 v MI6: Tug-of-War Over a Triple Defector
18:30 GMTOutrage in Italy After Female Correspondent Sexually Harassed During Live Broadcast
18:26 GMTFrom Geek Fashion Model to Big-Tech Gandalf — Jack Dorsey's Rise and Fall
18:13 GMTWho is Parag Agrawal, New Twitter CEO?
18:08 GMTFrench Prosecution Demands Imprisonment, Fine, Political Ban of Former PM Fillon - Reports
18:04 GMTBiden Ready to Release More Oil From Strategic Reserve to Keep Prices Down- Energy Adviser
17:47 GMT'Plausible Deniability': Joe Biden Was Aware of Hunter's Chinese Deals, But Knew No Details – Report
17:03 GMTPresident Joe Biden Delivers Update on US Response to Omicron Coronavirus Variant
17:02 GMTTwitter CTO Parag Agrawal to Replace Jack Dorsey as CEO
16:49 GMTGerman Inflation Rate Soars to 29-Year High of 5.2% – Statistics
15:44 GMTNew Omicron COVID Variant May Cause Stagflation, Economist Warns
15:37 GMTSwedish Parliament Votes Andersson for Prime Minister Again After Surprise Resignation
15:35 GMTRihanna Stuns Netizens With Her Company’s Pyjamas With 'Derriere Cleavage'
15:23 GMT12 Indian Politicians Suspended From Parliamentary Session, Opposition Brands Move 'Undemocratic'
15:22 GMT'Trying to Keep Fart in Your Pants': Piers Corbyn's Anti-Mask Video Baffles Netizens