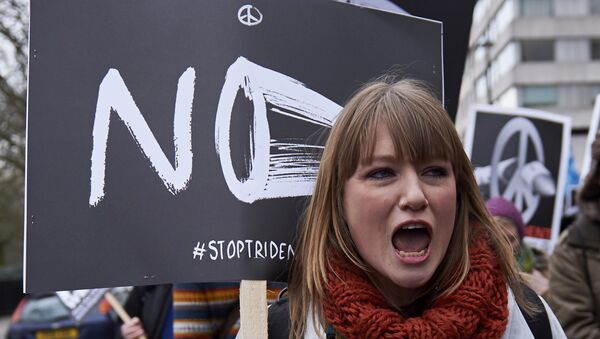 While most of the attention in British parliament on Wednesday was focussed on David Cameron’s farewell in the House of Commons, nuclear-free campaigners have taken to Westminster as part of a “mass lobby of parliament” against the renewal of the UK’s “redundant” Trident nuclear deterrent system.

The Campaign for Nuclear Disarmament (CND), along with 20 other organizations have called on Britons to contact their MPs and "express their concerns" about government plans to renew the country's four-strong nuclear submarine fleet, while a separate public viewing will be held in the House of Commons on Wednesday evening.

​Ahead of a parliamentary debate on the issue of Trident renewal on Monday (July 18), CND general-secretary Kate Hudson told Sputnik there are a number of "compelling arguments" behind not renewing the nuclear deterrent.

​"There are many reasons to do with the international context, where there is a very serious drive towards a ban on nuclear weapons, which is coming from the UN general," she said, adding that "many people, even senior political figures who thought in past it was necessary, are changing their minds."

Just heard of one MP who's changed her position on #Trident and is now voting against. Good news! Keep lobbying folks @CNDuk #ScrapTrident

​Monday's debate and subsequent vote on Trident is still shrouded in some secrecy, with activists in the dark over whether the vote will specifically apply to renewing Trident or the issue of nuclear deterrence in general.

'Money Should be Spent on Health, Education, Jobs'

While the current Conservative government has pledged to renew Trident, there is growing opposition according to Hudson, with Labour leader Jeremy Corbyn and Scottish National party among those against the deterrent's upgrade.

She says apart from the international context, there's a number of domestic issues why people would reject another Trident program.

​"In terms of Britain itself, there are some very key arguments. One of course is the cost at a time when government spending is facing cutbacks. To replace the system as it currently is, including lifetime costs, would be in region of £205 billion (US$271 billion). That's a very significant amount of money. Many people feel that it's not the best use of taxpayers' money and national resources. They'd rather see it spent on heath, education, jobs and so on."

While the CND believe replacing Trident will cost more than US$270 billion (£200 billion), British government estimates are substantially lower, with a review in November suggesting the system's overhaul would cost up to US$54 billion (£41 billion), including contingency costs.

At #PMQs, @AngusRobertson attacks Trident but he doesn't speak for all Scots or even most https://t.co/KY1didjCBf pic.twitter.com/qnn0oRIpW5

​Hudson also raised questions over the practical use for such a nuclear submarine system, labelling Trident a ‘Cold War system."

"In technological terms, Trident will be redundant," she told Sputnik.

"The government's own national security strategy last autumn identified terrorism, climate change, pandemics and cyber warfare as the major challenges that Britain faces in terms of its security. Clearly nuclear weapons do nothing to address those challenges, so that's another area of concern."