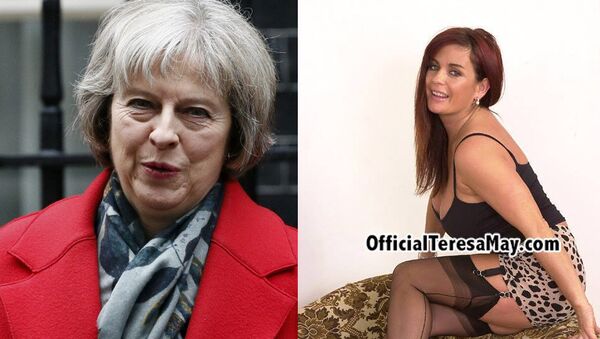 On Wednesday the UK will have a new prime minister, however there seems to be some confusion over just who will get the keys to Number 10 Downing Street, with some Britons mixing up incoming PM Theresa May with glamour model and adult film star Teresa May.

The model's name has been trending on Twitter where she has gained more than 1,000 extra followers after it was announced that Home secretary Theresa May would be the UK's second female prime minister.

@RealTeresaMay I was the 10k follower ✌️🍻🍾

​The announcement sparked a series of well-wishing messages for Teresa the actress on social media.

I guess soon she'll be too busy negotiating our Brexit. https://t.co/73FuBaJPEC

She is probably more popular than Michael Gove. https://t.co/e0RAKQ3okd

​The attention has been so great that it forced Teresa May to change her Twitter profile.

Just for a second, I thought I'd uncovered a massive political scandal… https://t.co/RTOh3UuFww

​​"I am a UK Glamour model, not the Prime Minister," her profile stated.

She replied to the series of messages in a tweet, saying how she thought it was "amusing" that so many people were seemingly confusing her with her namesake.

I find it quite amusing how many people think I'm #TheresaMay the Prime Minister. Just shows how ignorant some people are.

​Despite working in vastly different professions, it seems Teresa May also shares the incoming prime minister's reputation as a tough negotiator.

A special mention to press and media… Don't expect me to talk to you for FREE! I'm sure you wouldn't do work for free and neither do I!

​Meanwhile, she also managed to find a way to capitalize on her newfound attention, leading to calls for the adult film star to change professions.

If you want to buy a #Topless signed #Selfie of me email me at info@t-may.co.uk — I'm only doing these for a short while