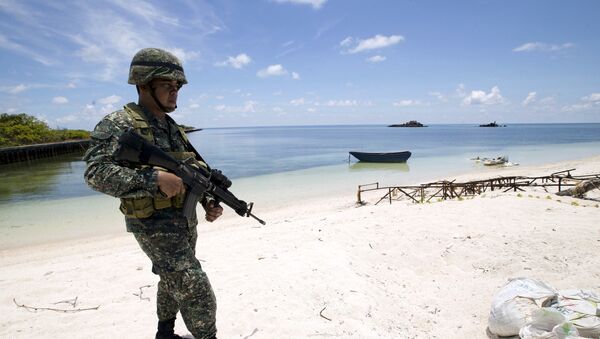 In the follow-up to the announced ruling of the Hague-based Permanent Court of Arbitration that China “has no legal basis to claim historic rights to South China Sea resources,” one Russian military expert predicts that the area might soon become the “scene of a serious foul-up”; his warning seems to have been confirmed by Chinese media reports.

Hague Verdict: China Has No Legal Basis to Claim South China Sea Resources
Russia’s military correspondent Victor Baranets has commented to Radio Sputnik on the ruling of the Hague-based Permanent Court of Arbitration, which announced on Tuesday that “there was no legal basis for China to claim historic rights within the sea areas falling within the 'nine-dash line.”

“Those “insular” discussions and disputes are turning into a “hot spot” in the Asia-Pacific Region,” he noted, citing as an example serious disputes between Japan and China about artificial islands in the South China Sea.

“And ready at hand we see US jets and warships,” he said, adding that the US interference in the regional disputes only complicates the local conflict.

China is being confronted by a relatively serinous naval contingent, Baranets said, therefore predicting that the area might soon become the “scene of a serious foul-up,” which, under certain circumstances, could engulf the region in crisis or even lead to a world war.

“It is because the parties to the dispute are the two largest geopolitical forces,” he explained.

China Does Not Accept or Recognize 'Invalid' Hague Verdict on S China Sea
China will not comply with the court decision, which has been written under US pressure, and will continue to have its own way. This might result in a skirmish at sea, in the air or on the ground, suggested the military expert.

The analyst noted that China has not accepted or otherwise recognized the legitimacy of the Philippines claim, which was filed via the Permanent Court of Arbitration. Beijing is convinced that all it has to deal with is a territorial dispute and that such discrepancies should be resolved by negotiations between the interested parties and not by arbitration.

“This issue could not be resolved only by the Hague Court. A special commission should be formed, which will include, among others, the historians of the countries involved in the dispute,” he said.

Meanwhile, he added, the issue is being dealt with very unprofessionally: the US gives the “go-ahead” to the court, the court salutes and makes a decision which satisfies the US and does not satisfy China. This is the epicenter of the crisis.

The US, in the meantime, is behaving like the master there, Baranets noted.

Taiwan Sends Patrol Ship to South China Sea in Defiance of Hague Ruling
“We should simply watch how the US is behaving in the region,” he said.

“It has already become used to being a “lord of the region”. It decides in their favor or in favor of their satellites. And the court’s decision might lead to a deterioration of relations, not only between the US and China, but with a number of states, because not many countries will agree that the issues of territorial disputes should be solved under the US scenario,” the expert suggested.

The ruling “more shameless than the worst prediction”

His point of view is somewhat confirmed by the Chinese media reports, which have already called the ruling “more shameless than the worst prediction”.

“All Chinese people are outraged by this illegal verdict and the world's peace-loving public is astonished by the biased decision that may escalate regional tensions,” reads the article in the Global Times, a Chinese English-language newspaper in the follow up to the ruling.

China White Paper Slams Philippines' South China Sea Claim as 'Illegal'
It further explains that the United Nations Convention on the Law of the Sea (UNCLOS) has no jurisdiction over territorial disputes, a principle that has been established since the convention was signed.

The tribunal's verdict, by redefining the disputes, has stepped in to dictate over the sovereign and maritime demarcation disputes between China and the Philippines, according to the outlet.

The tribunal, it says, has shamelessly overstepped and abused its authority. It is a brutal violation of UNCLOS and the entire international law system.

The newspaper further warns that “Chinese people will firmly support their government to launch a tit-for-tat counterpunch.”

“We trust that Chinese law enforcement and military forces have been well-prepared. We don't believe the provocateurs are emboldened enough to take forceful actions other than making some statements.”

“We have trust in the Chinese government and in our national strength to deal with these challenges. We have kept a firm hold on the reclaimed islands and reefs in the Nansha Islands. Compared to the long-term significance of these strategic pivots, the arbitration is merely a bubble,” it concludes.