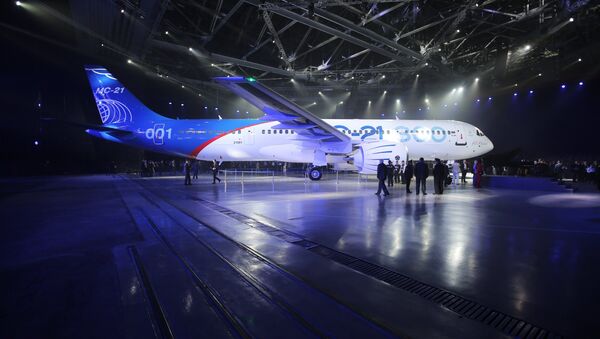 © Sputnik / IRKUT Corporation/Marina Lisceva
/
Go to the photo bank
Subscribe
The new MS-21 twin-engine jet airliner, which was recently introduced by the Irkut Corporation and Yakovlev Design Bureau, has a number of advantages that may allow it to successfully compete with Boeing and Airbus.

Russia Starts Research of PD-35 Engine for Wide-Body Aircraft
Despite the fact that some experts claim that the new airliner doesn’t stand a chance against the production of the US and European aircraft manufacturers, it is way too early to early to make such assumptions, according to Japanese Business Press.

The newspaper points out that the MS-21 has three distinct advantages that may allow it to succeed at the global market.

The plane’s thick fuselage makes the MS-21's passenger compartment 11 centimeters (about 4.5 inches) wider than that of the A320, which may appeal to people who take long-distance flights. Also, the plane’s fuselage is being manufactured and assembled in Russia, and its wings are made of a carbon fiber composite material, which helps drastically reduce the plane’s price.

Furthermore, the Irkutsk Aviation Plant that manufactures MS-21 also produces parts for A320, so the quality of components used in the Russian aircraft should be on par with those of Airbus; and the price of the MS-21 is also about 15 percent lower than that of an Airbus aircraft, the newspaper adds.

"Therefore, in terms of quality, MS-21 is close to Boeing and Airbus aircrafts. Its composite wing has a serious advantage over wings of Boeing 737 and Airbus A320, which are made of conventional aluminum alloy; and the Russian aircraft has a rather competitive price. Despite such disadvantages as the lack of an actual track record and client support, MS-21 definitely has a chance to succeed," the author concludes.

While at this time the Irkutsk plant can only manufacture approximately 5-10 aircraft a month, which cannot compare to the sheer production volume of Boeing and Airbus, the Russian company has pretty good odds at securing its niche at the global market as the third-largest plane manufacturer worldwide.

However, in order to do so, the company has to sell its aircraft all over the world and not just in Russia and the former Soviet republics, Japanese Business Press concludes.

The MS-21 is a twin-engine short- and mid-range airliner with a capacity for 150-212 passengers. The first planes in the new series are set to be delivered in the end of 2018. The presentation of the aircraft took place on June 8 in the Russian city of Irkutsk.

000000
Popular comments
You can be absolute sure that the US fascists and their vassals will do their utmost to discredit the plane, write it down in their media and arrange a crash. Or the US can simply order and add the engines and other parts not made in Russia, on it´s sanction list. Wait for Russia to resume the production and increase the production capacities of the modernised, all Russian domestic long range IL-96 instead. Then there is also the Russian-Chinese plans on a joint venture in this regard