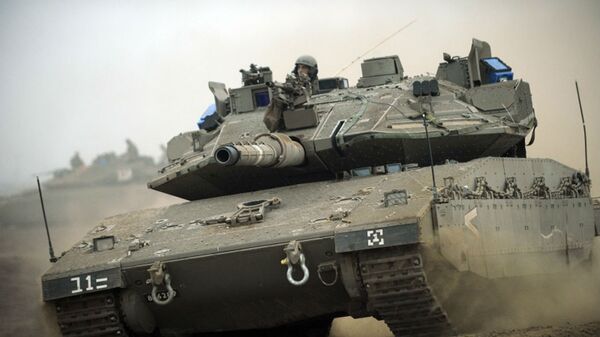 With the backing of tanks, Israeli military bulldozers have entered the demilitarized zone that divides Israel and the Syrian Golan areas, constructing a set of anti-tank trenches and fortifications 300-500 meters inside the DMZ.

This is the first time that the Israeli Defense Forces (IDF) have operated openly on the Syrian side of the border since the beginning of the Syrian civil war some five years ago. No opposition or protest from Syrian President Bashar Assad in Damascus has been offered.

The IDF operation was ongoing as of Wednesday, July 12, on a stretch of terrain facing the Syrian town of Quneitra on one side, and the Israeli Golan village of Ein Zivan on the other. The enclave dividing the Golan between Israel and Syria is defined as a demilitarized zone (DMZ) under the military control of the UN Disengagement Observer Force (UNDOF) and the Syrian civilian administration, according to the 1974 armistice agreement. The zone is bound by two 10km strips of land to allow each side to maintain military strength. Within a 25km radius, no ground-to-air missiles can be launched from the DMZ.

Both sides agreed that Syrian nationals who were forced to leave their homes as a result of the October 1973 war and its aftermath would be able to return. Quneitra, an area in southwest Syria that was particularly devastated by the war was returned to Syria despite a government commitment to ban terrorist activity. This commitment included Israeli infiltration from the Golan sector, along with plans to repopulate the town.

The deal has been turned on its head however, primarily due to how the Syrian civil war has played out over the last two years. Observers from the United Nations deserted their posts, creating a void that was filled in part by Syrian troops and a mishmash of different rebel groups.

As Israel and Syria attempted to preserve some semblance of the deal, the DMZ was left mostly unoccupied. Despite this, Assad’s allies in Hezbollah and Iran made repeated attempts to secure a firm military presence on the opposite side of Israel’s Golan defense lines.

Damascus has been silent on Israel’s military activity in the Golan, a form of intermission according to some, as Assad waits for Tehran to endorse a joint counteraction led by Iran, Hezbollah and Syria.

IDF movements have reportedly been supported by an unusual Israeli Air Force presence over Lebanon and Syria. There was also a sense of heightened readiness, as this week marks the 10th anniversary of the Lebanon war fought between Israel and Hezbollah.

Notably, Hezbollah did not celebrate the anniversary this year with its usual boasts of a "great victory," which lends credence to suspicions within Israeli military circles that there may be a surprise attack on the horizon from Iran’s Lebanese proxy.