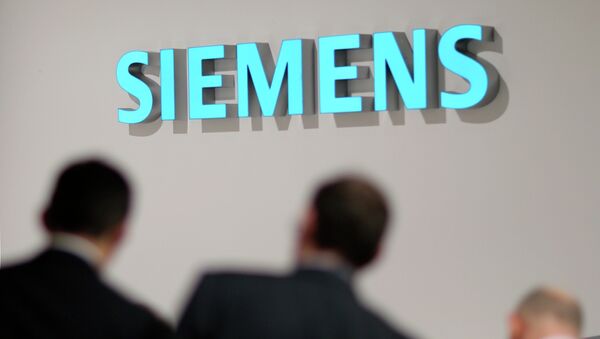 Greek Justice Minister is going to urge for the start of a trial on the bribery case of German engineering company Siemens AG on Thursday, according to Prime Minister Tsipras press service statement.

"Prime Minister Tsipras contacted Justice Minister Nikos Paraskevopoulos, who has put him into details about the judicial investigation of the Siemens case," the Wednesday press release said.

In March 2015, the Greek authorities submitted a court case claiming that Greek officials were being bribed by Siemens. The court has been postponing hearings on the case since then.

Siemens to Lay Off Some 2,500 Staff in Restructuring Drive

Nikos Paraskevopoulos is set to address the court on July 14 and urge prosecutor Xenia Demetriou to start immediate trial in accordance with the country's criminal law.

Some 64 people are to stand trial, including Siemens and OTE (Hellenic Telecommunications, a Greek telephone operator) executive officials, as well as former head of Siemens' Greek branch Michalis Christoforakos who has been hiding in Germany for seven years.

Between 1992 and 2006 Greek officials allegedly accepted some 70 million euros (about $77 million at current exchange rate) to secure sales of digital equipment to Greece's OTE telecommunication company from Siemens. Greece reportedly may have lost up to 90 million euros (about $99 million) because of the bribery scandal.