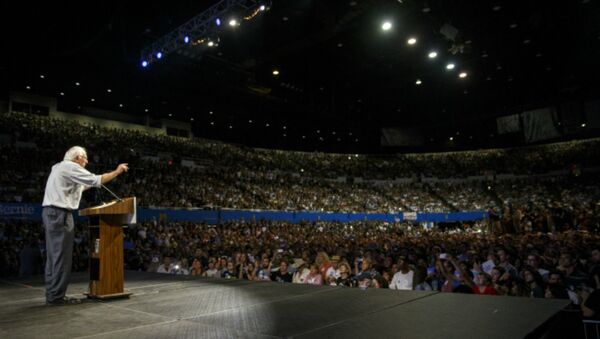 © Peter Stevens
Subscribe
Senator Bernie Sanders was propelled to support Hillary Clinton’s candidacy for US president because of his alarm over the rise of presumptive Republican presidential candidate Donald Trump, US analysts told Sputnik.

"I think Trump and the forces that back him really scare Sanders, and though he is highly critical of Clinton, especially on Wall Street issues, he sees a need to defeat Trump," California State University Professor Emeritus of Political Science Beau Grosscup said on Wednesday.

"That can only happen if he shows the way for disgruntled progressives who are rightly critical of Clinton on a number of issues, especially on war, Wall Street connections and health care," he stated.

Sanders’ support would prove very important to Clinton, who needed all the help she could get, Grosscup observed.

"The [Sanders] endorsement will be very helpful to Clinton as she has very high negatives and once again the progressive forces have nowhere to go but to the neo-liberal Democrats," he said.

"Sanders is such a decent man that his endorsement could make Clinton more ‘likable’ and ‘acceptable’ to many progressives. The grassroots organizing skills and efforts that helped make Sanders a serious candidate can only help Clinton with her presidential campaign," he added.

However, by endorsing Clinton without insisting on any important political conditions from her, Sanders has already given her a strong advantage, Ohio Northern University Assistant History Professor Robert Waters pointed out.

"Sanders got Clinton to move left on issues like raising the minimum wage higher than she wanted and promising a ridiculous and impossible to achieve a free college program. But on anything really important, he got no concessions out of her and he’s not making a big deal out of it," Waters observed.

Waters judged that Sanders received nothing more than "empty promises" from Clinton in return for his endorsement.

"Heck, he couldn't even get her to dump [Democratic National Committee chairperson] Debbie Wassserman-Schultz," he noted.

"It's good for Clinton that Sanders endorsed her because 15 percent of his voters had angrily announced that they are #NeverHillary, so this should peal a few of them off and into her camp," he pointed out.

"The fact that Sanders did not take Jill Stein up on her offer means Clinton still has a shot to win. If Sanders had run on the third party ticket, there was no way she could win," he maintained.

During the Democratic primary elections, Sanders beat Clinton in 22 states, but failed to garner the 2,383 delegates needed to secure the party’s nomination.

Clinton is expected to become the Democratic Party’s official nominee during the Democratic Convention in Philadelphia, Pennsylvania the week of July 25.