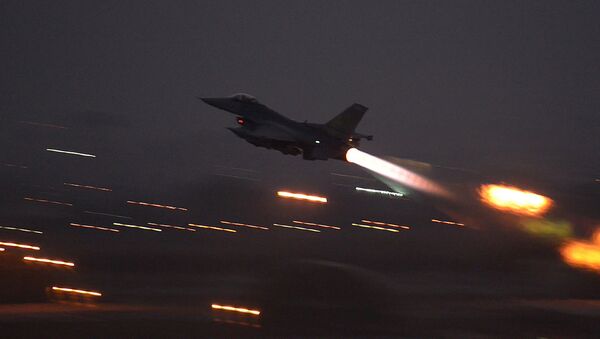 © AP Photo / U.S. Air Force via AP
Subscribe
The US-led coalition against the Islamic State (ISIL, or Daesh) conducted 16 airstrikes in Syria and seven strikes in Iraq, according to the US Central Command (CENTCOM).

EXCLUSIVE: Yazidi Female Fighters Tell Daesh They'll 'Wipe Them Out'
WASHINGTON (Sputnik) — The US-led coalition against the Islamic State (ISIL, or Daesh) conducted 23 airstrikes against the terror group’s positions in Syria and Iraq on Monday, the US Central Command (CENTCOM) said in a press release.

The 16 airstrikes in Syria hit positions near Raqqah and Manbij, destroying tactical units, fighting positions, a bridge and a wellhead, according to the Central Command.

Daesh Militants Set 5 Oil Wells South of Iraqi Mosul on Fire
In Iraq, the airstrikes near five cities, including Bashir and al-Baghdadi took out an Daesh communications tower, vehicles, tacticle units, boats and a mortar system.