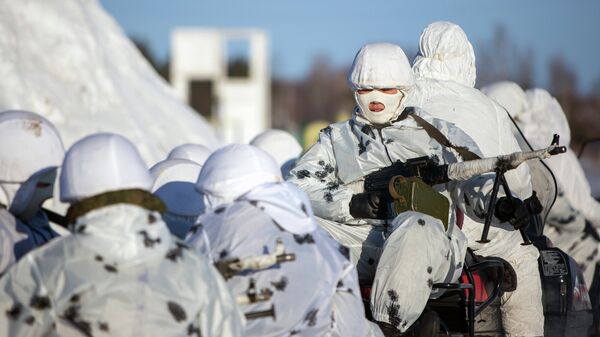 Ilya Tsukanov
All materialsWrite to the author
Amid NATO's buildup along Russia's borders, including in the Arctic region, Moscow is stepping up efforts to strengthen its northern defense. Moreover, in addition to the Navy and Aerospace Defense Forces, the Arctic's defense is increasingly coming to depend on troops from the ground forces – serving under extremely harsh climactic conditions.

Analyzing the Russian military efforts to defend its vast Arctic expanse in a piece for the independent news and analysis website PolitRussia, journalist Oleg Polevoy recalled that "while Arctic motorized rifle units appear from time to time in the Russian media, the general public knows little about them; collecting information from television and newspapers is a painstaking process."

For a long time, the journalist recalled, "the only infantry unit in the entire Russian North was the 200th Motorized Rifle Brigade at Pechenga, Murmansk Region. That unit was established in 1997 on the basis of the old Soviet 131st Motorized Rifle Division…It's obvious that a single brigade for the defense of territory including the entire Kola Peninsula and Chukotka was, to put it mildly, insufficient, but it's good that it was least was preserved in the 90s," a very difficult period for the country and its defense capabilities.

Most recently, the government of NATO member Norway announced a defense spending bonanza, aimed at heavily modernizing all three branches of their military. Meanwhile, earlier this year, the US mulled placing a powerful new radar complex in the country, on top of the one they already have, and aimed primarily at spying on Russia.

In light of the changing conditions, Moscow found it necessary not only to ensure coastal defense, but to create a mobile force capable of reacting anywhere in the Russian Arctic.

"In 2012, the creation of a [new] separate Arctic brigade was announced. In 2014, the government signed a corresponding decree. And on January 17, 2015, the 80th Motorized Arctic Brigade (stationed in the locality of Alakurtti on the Kola Peninsula) received its colors."

The new unit's tasks aren't easy, the journalist noted. "Not only do they have to operate in extreme climactic conditions, but their 'sworn friends' [among foreign militaries] have already set the bar very high."

"The Canadian Army too on the whole is also well-trained for action in the Arctic. Recently, Ottawa set about reorganizing and reequipping its ranger units responsible for security in the Arctic region, which for many years before looked more like volunteer militia than regular army (or even reserve) units. In addition, Joint Task Force 2, an elite special operations unit of the Canadian Forces, is also prepared to conduct tasks in the Arctic." 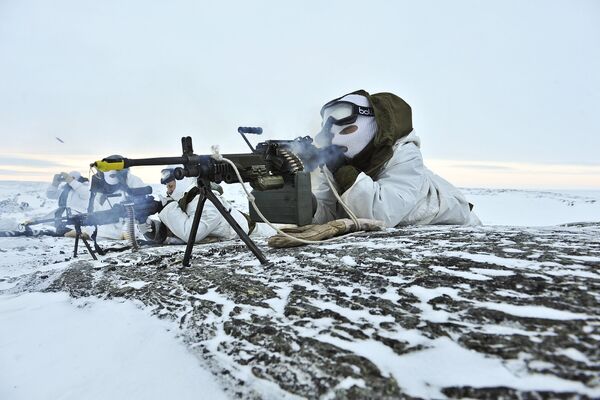 The Norwegian Special Force 'Rangers', meanwhile, have been specially honed for action in the Arctic. "Recently, Oslo announced the creation of a new unit of special forces practically on the border with Russia. Against the background of a total re-equipment and modernization of the Norwegian Armed Forces, this does not sound very promising," the journalist suggested.

After Decades of Russian Goodwill, Norway Builds Up Military Against Moscow
Effectively, according to Polevoy, these 'restless neighbors' mean new demands for the defense of the Russian Arctic. Therefore, "although they are nominally listed as motorized infantry, given the conditions of service and the potential threats they face, they perform specialized tasks" normally given to elite Spetsnaz (Special Purpose Military Units) forces.

"Even judging by the publications available in the media, the eye catches the fact that both the 200th and 80th brigades feature non-standard reconnaissance formations, but recon battalions. The troops carry out airborne and mountain (alpine) training. The material provisions for Arctic brigades are also special; new two-tiered tractors, snowmobiles and hovercraft are currently being developed for them." 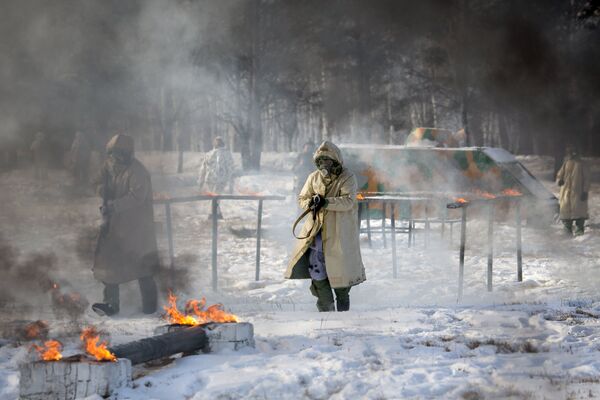 Last year, the Arctic units were provided with new articulated tracked snow and marsh buggies, military ATVs, quads and snowmobiles. "The new equipment and weapons are being 'run-in' in combat-like conditions, including via large-scale exercises taking place recently on the Tymyr Peninsula."

"And it looks like the protection of the Arctic from the ground will rest not only on the Arctic motorized infantry," the journalist added. "In 2014, the Novosibirsk archipelago was used for training exercises by Russia's Airborne Forces; 350 troops of the 98th Airborne Division conducted airdrop training, becoming the largest mass landing in the Arctic's history. And it seems setting records was not their only goal. Airborne Forces Commander Vladimir Shamanov stated recently that 'the establishment of an Arctic Airborne force is only a matter of time.'"

Mission Possible: Russian Paratroopers Land on Drifting Floe in Arctic
Ultimately, Polevoy suggested, in the current situation, "our military has no time for relaxation. Arctic exercises by NATO countries and their partners have followed one after another. In 2015, the Canadian military conducted maneuvers in the Far North. The same year, joint US, UK, Canadian and Norwegian drills in the Arctic lasted five weeks. In the spring and summer the Scandinavians, including Sweden, Norway and Finland also 'trained to fight against Russia' in the region. Finally, in the spring of 2016, the US military staged the ICEX 2016 drills."

"The Arctic is one of the most economically promising regions in the world. The Arctic Circle holds enormous reserves of hydrocarbons and other minerals; the region also provides the shortest path for transporting goods from the Pacific to the Atlantic oceans. According to the norms of international law, a substantial part of the territory in Arctic waters belongs to Russia, thanks to the large extent of our continental shelf."

At the same time, Polevoy warned, "we know that international law has little meaning for certain powers when it comes to confronting someone from whom it is possible to take something away by force. We do not need lands belonging to others, but to prevent anyone from even thinking of 'reaching into our pocket' in the North, it's necessary to keep the gunpowder dry. And an important role in doing so will be played by the guys with the image of a polar bear on their sleeve."