Goodbye NATO? Brexit Threatens to Speed Up Creation of a Pan-European Army 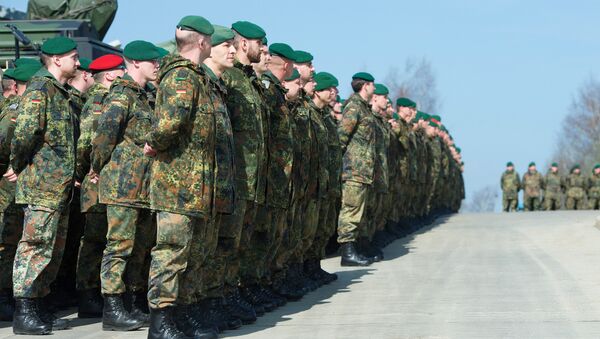 © AFP 2021 / DPA / PETER ENDIG
Subscribe
Britain's exit from the European Union may just result in the dusting off of old plans to create a pan-European defense force, writes Norway's Aftenposten. Clearly concerned, NATO has already warned against 'unnecessary competition and the waste of scarce military resources.'

Be It Clinton or Trump, Europe Must Get Ready to Arm Itself
During the course of Friday and Saturday's NATO Summit in Warsaw, a great deal of praise was heaped on the EU over the bloc's intensified cooperation with the North Atlantic Alliance. The parties declared their intentions for closer cooperation in areas including terrorism and cyber security, Aftenposten recalled.

"In the past few months, we managed to do more than we had in the last ten years," NATO Secretary General Jens Stoltenberg told the newspaper, referring to intensified cooperation between NATO and the EU.

"But the relationship is not without complications," Aftenposten Europe correspondent Oystein K Langenberg explained.

"Some countries of the EU, such as Germany and France, would like to see much closer defense cooperation under EU auspices, which could take place independently of the United States and NATO," the journalist noted. Moreover, "the British, who had been among the most vocal critics of this idea, voted to leave the EU, leading to renewed discussions" regarding a European Defense Force.

"The day after the British voted no to continued membership in the EU, the foreign ministers of Germany and France put forward the idea of a 'European security pact'." The proposal, Langenberg explained, emphasized the idea of "the EU as an 'independent global power', and call for the EU to establish a 'permanent civil-military chain of command'."

"The EU's new global strategy, presented a few days later, also calls for closer military cooperation under the auspices of the EU, and suggested that the bloc needs military forces which can act independently of the United States."

Better a Good Quarrel? 'Peaceful' Norway Seeks NATO Buildup in the North
Speaking to Aftenposten, Sven Biscop, the director of Belgium's Egmont Royal Institute for International Relations, explained the logic behind the idea of an EU-based military force. "I believe that the EU must develop the capability to carry out their own military operations from their own headquarters. Europe must be able to carry out operations without Americans." This, the analyst suggested, is virtually impossible today.

Naturally, Langenberg wrote, "NATO diplomats aren't exactly thrilled over the idea. Stoltenberg himself personally spoke out against the creation of [an EU] military headquarters and command structure."

"The important thing is to avoid duplication. NATO's command structures have been well tried and tested over the course of decades," the secretary general warned.

Sources within NATO, furthermore, believe that a European defense force would spread out scarce military resources even further.

"The last thing Europe needs right now is to alter its underlying security structures. In the worst case, this could lead to the re-nationalization of security policy and the weakening of NATO," an unnamed NATO official told Aftenposten.

The subject of pan-European security was discussed during dinner at the NATO Summit on Friday. According to Norwegian Prime Minister Erna Solberg, while the EU certainly has areas to focus on in terms of security policy, the focus should be concentrated on 'soft power', institutional construction and joint police work. "There is no sense in starting to create alternative command structures," she warned.

Post-Brexit UK Economy May Shrink Defense Budget - Joint Security Committee
Aftenposten's unnamed NATO official added that while the EU would be unlikely to create an effective security infrastructure, the attempt to do so would divert time and energy. "There is a reason why the EU has not been able to do anything in this area: they did not include the United States," the official said.

For his part, Mr. Biscop suggested that some dual structures may be possible, but also stressed that this was likely a question for the future. In his view, the possibility of EU countries merging their defenses could even be good for the North Atlantic Alliance.

"Such forces could act under numerous commands – that of its own government, the EU, NATO or the UN," the analyst said. Moreover, the analyst even suggested that Washington would not necessarily fight against closer defense cooperation between EU countries independent of NATO.

"My impression is that they have become more pragmatic when it comes to this question; NATO has ceased to be some kind of religion. For the Americans, the most important thing is that Europe increasingly takes responsibility for its own defense. Under what flag that occurs is less important," Biscop noted.

‘Big Mistake’: Germany Leads NATO Games Near Russia 75 Years After Nazis
Stoltenberg was less certain, telling the newspaper that now is not the time to spread resources thin. "…Given tight defense budgets, and with the knowledge that 90% of the EU's population lives in a NATO country, it would be foolish if we did not organize ourselves in such a way as to get the most out of our resources." A pan-European defense system, according to the secretary general, "would contradict our decision to spend more on defense, and to use the money more wisely."

For his part, Norwegian Foreign Minister Borge Brende suggested that that he does not fear increased competition between the EU and NATO, but emphasized that the organizations should complement one another. The minister also stressed that the EU's members must find a consensus on the deepening of EU defense cooperation.

However, there may be a hitch. "Countries in Eastern Europe such as Poland have made clear that when it comes to defense policy, they want to work [only] within the framework of NATO," Langenberg concluded.