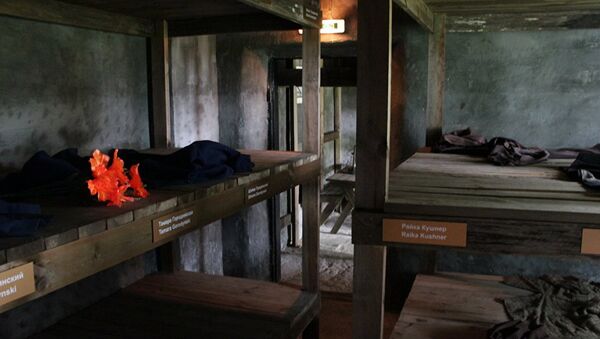 © Sputnik / Sergey Pushkin
Subscribe
In his latest op-ed, aimed at deflecting a barrage of accusations of anti-Semitism against US presidential candidate Donald Trump, Jared Kushner, prominent businessman of Jewish descent and Trump’s son-in-law, mentioned how his ancestors managed to flee from a ghetto during World War II and even join the resistance fighters.

Mexican President Says ‘No Way’ He Will Pay for Trump’s Border Wall
In his latest op-ed, aimed at deflecting a barrage of accusations of anti-Semitism against US presidential candidate Donald Trump, Jared Kushner, a prominent businessman of Jewish descent and Trump’s son-in-law, mentioned how his ancestors managed to flee from a ghetto during World War II and even join the resistance fighters.

Intrigued by his statements, Sputnik decided to learn more about the story of his family’s daring escape from the Nazis and the horrors they had to endure during their stay in ghetto.

Before the war the Kushner family lived in the town of Novogrudok, located in modern-day Belarus, where they owned a house and a store. The patriarch of the family and Jared's great-grandfather, Zaidel Kushner, was in the business of making fur coats and hats, which earned him the nickname Hatter. He had three children – one son, Chanon and two daughters, Leia and Rae (the latter would eventually become Jared’s grandmother).

It should be noted that back then Jews comprised over the half of the population of Novogrudok. 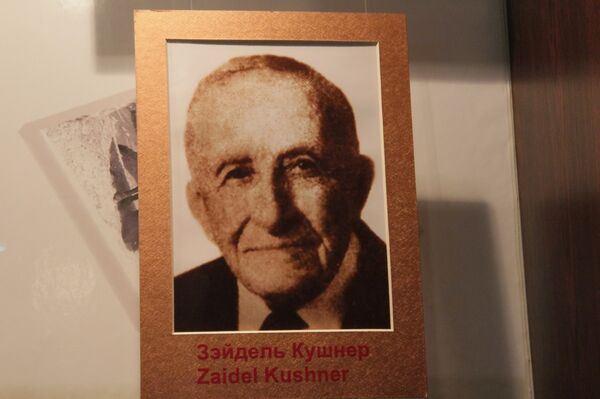 Just like the rest of the Jews living in the city, on December 7, 1941 the Kushner family ended up in a Nazi ghetto, Tamara Vershitskaya, former head of the Jewish Resistance Museum in Novogrudok, told Sputnik.

Only about 1,500 of the 6,000 Jews living in Navahrudak survived the so called 'selection' process that followed, when the Nazi officers apparently decided who would live and who would die simply by checking how many children they had and their respective occupations.

The Kushner family was lucky to be among those who were allowed to live. Their luck also held in summer, 1942 when they ended up among the 500 ghetto residents who were transferred to a closed labor camp – those who were left behind ended up being executed by the Nazis.

"I know nothing of what kind of a man Zaidel was, but I do know that he tried to make his family’s stay in the ghetto as comfortable as possible. For example, when Jews from the first ghetto were forced to perform hard labor in the city, he used bribery to ensure that his son was exempt from this practice," Vershitskaya said.

According to Vershitskaya, Zaidel’s wife, Hinda, and Chanon both ended up among those sentenced to death. But while Hinda resigned to her fate and even tried calling for her husband and daughters to join her and die together, Chanon managed to hide from the Nazis and avoid the firing squad.
This mass execution became the pivotal moment for the inmates – shocked and enraged by the deaths of their friends and loved ones, they decided to stage an escape. 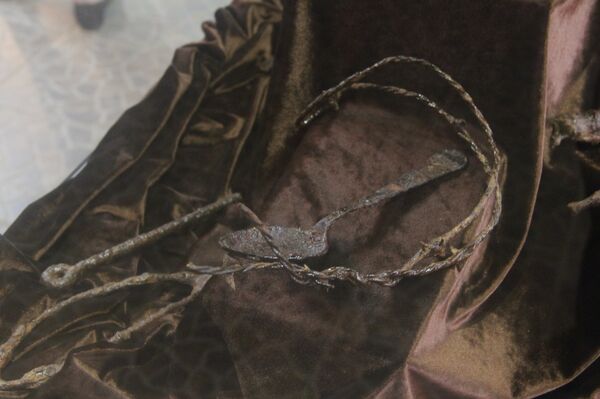 One of the spoons used to dig the escape tunnel.
© Sputnik / Sergey Pushkin

It took the captive Jews four months to dig a 200-meter-long tunnel to escape the ghetto, they dug it using spoons, forks and scrap iron, literally scraping their way to freedom.

"When we found a German military entrenching tool, I thought it was used for digging, but one of the men who helped build the tunnel explained that you couldn’t use a spade like that because the ground was mostly clay. They used spades like that to load soil taken from the tunnel into sacks sewn from the clothes of those who were executed. The soil was then hidden in attics, away from the prying eyes of the Nazis," Vershitskaya explained.

The prisoners managed to outfit their tunnel with a ventilation system made of water pipes dug into the ground, and even provide lighting by tapping into the power source of one of the guards’ floodlights.

On the night of September 26, 1943 the prisoners descended into the tunnel one by one, marking the beginning of what became one of the largest, most successful Jewish rescue operations in the German-occupied territories.

"The guards entered the building where the tunnel entrance was located only when all of the inmates were already inside the tunnel. They started shooting and in the morning they launched a sweep of the surrounding areas. And while the escape itself was very well organized, many of the escapees simply didn’t know what to do afterwards. Many of them simply went to sleep immediately after reaching the forest. Therefore, only two-thirds of them eventually survived," Vershitskaya said.

Chanon Kushner was one of those killed by the pursuing guards, while Zaidel and his daughters were among those 152 escapees who joined the Bielski partisans.

The exploits of the Kushner family as part of the resistance are less known, though Zaidel likely toiled at a workshop making equipment for the guerrillas while his Leia and Rae could’ve acted as lookouts, Vershitskaya speculated.

What is known however is that during that time, Rae Kushner met her future husband, Joseph Berkowitz, who later changed his surname to Kushner prior to the family’s immigration to the US.

The Kushner family, along with the families and relatives of other survivors, helped create the exposition at the Jewish Resistance Museum dedicated to the ghetto and to prisoners’ daring escape, both by recounting those horrible events and by providing financial aid.

"There are many successful people among the former inmates of this ghetto. Jack Kagan is a millionaire, Leibowitz is a millionaire, the Kushners are billionaires. I believe there is an explanation for that: if those people could survive here, imagine what they were capable of during peacetime," Vershitskaya concluded.

000000
Popular comments
This all sounds rather fanciful to me and another Jewish Tall Story . Its almost a copy of the Great Escape Film where Allied POW's tunnelled out of the camp.

FlorianGeyer
11 July 2016, 17:57 GMT5
000000
Intrigued by his statements, Sputnik decided to learn more about the story of his family’s daring escape.. -- Intrigued, indeed. Sputnik's conduct regarding Trump and this election campaign has been and continues to be despicable. The choice is clear, Clinton or Trump. I can't understand how that could be a difficult choice to pick Trump. If it's about NOT getting into a war with Russia and maybe even containing NATO, which it is, the world's survival has a much, much better chance with Trump. If Clinton supporters can't see that, not much I can do about it but get really serious about never attempting to negotiate with a so-called progressive ever again.
jas
11 July 2016, 17:54 GMT3
000000
Newsfeed
0
New firstOld first
loader
LIVE
Заголовок открываемого материала
Access to the chat has been blocked for violating the rules . You will be able to participate again through:∞. If you do not agree with the blocking, please use the feedback form
The discussion is closed. You can participate in the discussion within 24 hours after the publication of the article.
To participate in the discussion
log in or register
loader
Chats
Заголовок открываемого материала
Worldwide
InternationalEnglishEnglishMundoEspañolSpanish
Europe
DeutschlandDeutschGermanFranceFrançaisFrenchΕλλάδαΕλληνικάGreekItaliaItalianoItalianČeská republikaČeštinaCzechPolskaPolskiPolishСрбиjаСрпскиSerbianLatvijaLatviešuLatvianLietuvaLietuviųLithuanianMoldovaMoldoveneascăMoldavianБеларусьБеларускiBelarusian
Transcaucasia
ԱրմենիաՀայերենArmenianАҧсныАҧсышәалаAbkhazХуссар ИрыстонИронауОssetianსაქართველოქართულიGeorgianAzərbaycanАzərbaycancaAzerbaijani
Middle East
Sputnik عربيArabicArabicTürkiyeTürkçeTurkishSputnik ایرانPersianPersianSputnik افغانستانDariDari
Central Asia
ҚазақстанҚазақ тіліKazakhКыргызстанКыргызчаKyrgyzOʻzbekistonЎзбекчаUzbekТоҷикистонТоҷикӣTajik
East & Southeast Asia
Việt NamTiếng ViệtVietnamese日本日本語Japanese俄罗斯卫星通讯社中文（简体）Chinese (simplified)俄罗斯卫星通讯社中文（繁体）Chinese (traditional)
South America
BrasilPortuguêsPortuguese
NewsfeedBreaking
13:28 GMTIranian Official Says US Has No Right to Comment on Ties Between Tehran, IAEA
13:22 GMTAs Old Faces Leave Congress, Kanhaiya, Jignesh Are 'Icons of Hope' on Anti-Modi Side, Says Expert
13:17 GMTTwo Palestinians Injured in Clashes With Israeli Forces in West Bank, Reports Say
13:14 GMTYellen: Treasury Will Exhaust Measures on 18 Oct if Congress Doesn't Raise Debt Ceiling
12:57 GMTMessi Should Respect No. 1 Mbappe at PSG, Says Ex-Arsenal Star Anelka
12:52 GMTUS Court Indicts Lawyer for Perjury in 2016 Presidential Election Meddling Case
12:47 GMTBarack Obama Defends Presidential Center Site, Vows Litigation-Mired Project to ‘Benefit Community’
12:47 GMTGOP Furious Over Report Pentagon Asked to Access Russian Central Asian Bases to Monitor Afghanistan
12:43 GMTAt Least 9 People Reportedly Injured After Double Terrorist Attack in Syria
12:30 GMTRussian Diplomat Praises Hungary's 'Optimal' Choice of New Routes for Russian Gas Supplies
12:26 GMTLa Palma Volcano in Canary Islands Continues to Erupt
12:25 GMT'Like Finding King Tut's Tomb': Sealed Chamber Reportedly Found in 'Neanderthal Cave' in Gibraltar
12:21 GMT100+ Chinese Soldiers Reportedly Cross Border, Damage Indian Bridge
12:17 GMTRussian Investigators Open Probe Against Navalny, Allies Over Extremist Activities
12:14 GMTTop Vietnamese Diplomat Says Hanoi Prioritizes Cooperation With Russia in Foreign Policy
12:12 GMTDisgraced: Will Bump n Grind Star R Kelly Be Latest Sex Fiend Celeb To Have Their Work Airbrushed?
12:09 GMTISS Expedition 65 Crew Members Relocate Soyuz MS-18 to New Nauka Module
11:55 GMTAustralian Regulator Seeks More Powers to Curb Google's Dominance in Ad Tech Sector
11:49 GMTUK Doesn't Have Plan for Extra-Terrestrial Encounter and It's 'Huge Mistake' – UFO Researcher
11:37 GMTPrince Andrew Slammed Journalists Who ‘Poke Their Noses Everywhere' in ‘Candid Verging on Rude' Rant