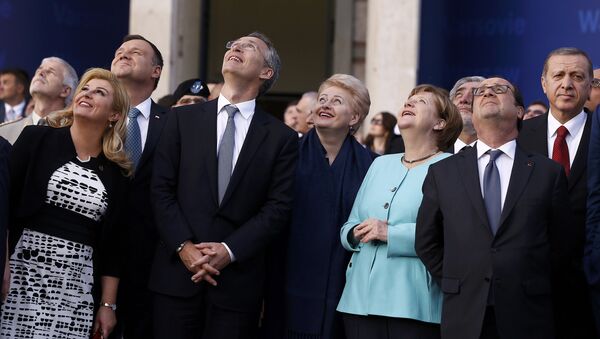 © REUTERS / Kacper Pempel
Subscribe
International
India
Africa
Although the participants of the NATO summit signaled their readiness to expand constructive relations with Moscow, the main outcome of the Warsaw meeting was the expansion of the alliance's military presence near Russia's borders, according to the Russian newspaper Vzglyad.

Trojan Horse: This Country Ruining NATO's United Front on Russia
The NATO summit in Warsaw saw participants paying lip-service to the necessity of the alliance bolstering ties with Moscow, the Russian newspaper Vzglyad reported, drawing attention to the fact that the expansion of NATO's military presence near Russian borders was the main result of the Warsaw gathering.

The newspaper referred to Konstantin Kosachev, head of the Russian Upper House's International Affairs Committee, who slammed the Warsaw meeting as "a summit of lies" as its only key decision was based on false statements about alleged threats emanating from Russia.

He wrote on his Facebook page that "NATO's decision to deploy its four battalions in Poland and the Baltic states are unlikely to drastically change our relationship." 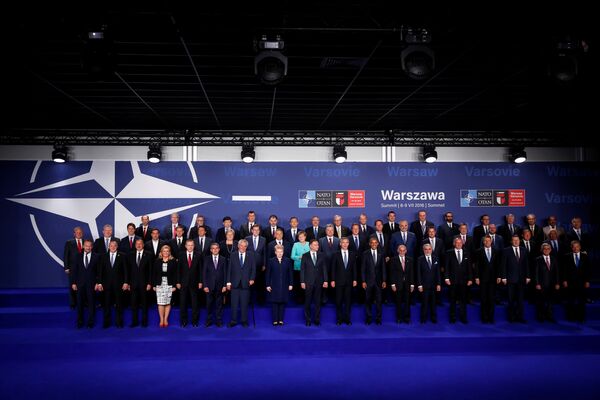 NATO heads of state and other leaders participate in a family photo at the NATO Summit in Warsaw, Poland July 8, 2016.
© REUTERS / Jonathan Ernst

"We are not afraid of soldiers, we are scared of politicians who, knowing full well that there is no threat from Russia, continue to deceive millions of people. This is why the Warsaw gathering is a summit of lies," according to him.

Former president of the USSR Mikhail Gorbachev, for his part, described NATO's steps as a preparation for war. Vzglyad quoted him as saying that "the Warsaw summit's rhetoric almost shows that the alliance is declaring war against Russia."

"They talk about defense, but actually they are preparing for an offensive," he pointed out.

He was echoed by military expert Alexander Perendzhiyev, who in an interview with the Vzglyad lashed out at NATO's double standards, saying that in official documents, the alliance calls Russia a potential threat on par with Daesh, while declaring its  unwillingness to see Russia as an enemy.

"NATO's official documents enable the alliance to receive further funding in order to develop its infrastructure near Russian borders," he said.

Perendzhiyev also lambasted NATO for failing to analyze the international situation, especially when it comes to European security and the threat of terrorism. He expressed doubt about the necessity of deploying "thousands of [NATO] servicemen near the Russian border."

He added that it is much easier for NATO to recognize Russia as the enemy rather than to signal its readiness to contain international terrorism.

"The terrorist attacks in Brussels and Paris showed NATO's full helplessness as far as tackling terrorism is concerned, and they will continue to demonstrate this weakness in the future. It is much more convenient for them to speak of the alliance opposing Russia," he said.

According to him, clinching an agreement on cooperation between NATO and the European Union became another major result of the Warsaw summit.

Russia 'Has All Reasons' to Assume NATO Buildup is Directed Against It
Perendzhiyev said that such accords allow NATO to take advantage of the resources of the European countries that are not members of the alliance, including Austria, Sweden and Finland.

"This treaty may turn the EU into a kind of NATO branch because in the course of this interaction it is the US which will dominate," he said, adding that the Warsaw summit could be described as the European states engaging in self-deception.

The NATO summit took place in the Polish capital of Warsaw on July 8-9. The alliance has agreed to deploy four battalions to Latvia, Lithuania, Estonia and Poland.

The member countries also decided to launch a European missile defense shield and bolster their presence in the Black Sea.